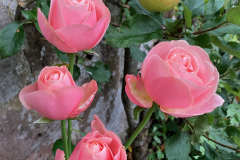 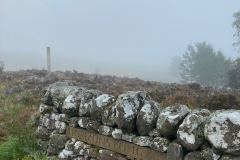 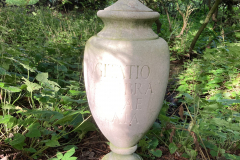 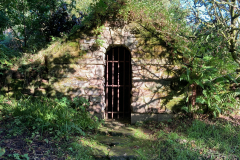 The end of the visitor season.

The month begins with what the weather forecast describes as an ‘anti-cyclonic gloom’ – a sequence of brooding grey skies, but then peaks with the warmest day of the year (it feels like) piercing bright sunlight bringing an unexpected late flush of summer.

And for whatever reason it is the sunny days which linger longer in memory, though by the end of the month we have lapsed back to more familiar dullness as the season draws to a close.

There is still much activity as the formal raspberry beds are cleared out by the Kailyard and in the Front Garden – hopefully the camomile underplanting in both areas which has reseeded itself will come again next year.

The carved stone planter Even gods have dwelt in woods has been repositioned so that it is more evident as you enter the Woodland garden – the planting around it had all but completely camouflaged it from view and was out of scale, so it has been moved just a little way back alongside the other stone planter Semper Festina Lente – both work well in relation to each other. Some creeping thyme (appropriately) is planted to fill out the cracks in the pavers here.

Further ox eye daisies are planted on the hillside at the back of the lochan – gradually more and more of this area is being populated as intended to create a complete flowering bank.

Hard wood cuttings are taken from rosemary, hydrangea petiolaris, and evergreen honeysuckle to be brought on for next year along with a few autumn seed sowings. The shelves in the greenhouses are packed full, along with a couple in the kitchen fridge to aid germination.

All of the art works are cleaned, given a quick wash down and a late season refresh – some rather weary looking surrounding planting is also cut back so that pieces remain visible and clear in their settings. The perimeter planting around the back of the Temple of Apollo is cot down and the gutters cleaned out.

In the Little Wood the ground cover is spruced up again and also around flag pole – a victim of the storms earlier in the month a new flag will be needed for next year as its ends have been frayed and shredded.

There is much deadheading, trimming and pruning of things which have gone over or become overstretched or straggly – throughout the garden leaves are beginning to curl and crisp, their greenness gone.

The recurrent water supply leak from the top pond means the aqueduct runs erratically at best – a revised long term solution is still evidently required. A small repair is made to the inscribed top rail of the wooden entrance gate – `The Fluted Land.

Roses put on a late flush of flowering and echinops spiky blue pom-poms stand out among the borders at the front of the house and by the Temples, as elsewhere the rose hips shine bright red in amongst the hedgerows.

By the Camouflaged Flowers brick plinths the cotoneaster is re-shaped into its intended wavy sea forms, and is now heavily laden with masses of red berries.

Some further attention is given to the Hortus beds – lemon balm and nepeta are split and spread out – more light really needs to get into this already shady space – a few larger limbs of overhanging trees have been identified to be thinned out so that the planting inside here can have a better chance to thrive.

By the end of the month the last of the grass cutting hopefully for a while – to be replaced with collecting fallen leaves as a regular and never-ending task.

These final days too mark the end of the visitor season, and the commencement of autumn. A sure familiar cycle comes round again.