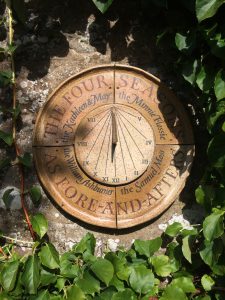 The steady round of regular tasks continues, though the changes in season are much more evident as the leaves are changing colour and beginning to fall – all else is starting to go over – as the promise of late summer never really came to pass. It is a sequence of ‘in-between’ days, gradually shifting towards autumn.

As a consequence there is much clearance and tidying to be done to keep everything looking as well as possible.

All of the hedging gets another trim – the yew and snowberry in the Roman Garden – and also to maintain the formality in this area the planting around the base of the yew is refreshed with alternate rows of purslane and bugle which will hopefully naturalise there.

By the Camouflaged Flowers brick plinths in the woodland the cotoneaster is reshaped to rolling wave forms – at the moment it is full of berries giving the impression of a blood red sea.

Also at the entrance to the woods the Dido & Aeneas Grotto – here the persicaria by the front entrance is split and spread so that it will provide a fuller effect when it blooms next season – at last the willow herb seems under control and all but eradicated in this area, so that feels like a small victory – though there are many more battles to be fought with our ‘obstreperous companion’…

In the Epicurean Allotment hyssop is split and reset in formal rows, along with the fennel and other plants here to maintain the decorative structure of this plot. There is a noticeable increase in light levels from the tree removals already in this area, so it should hopefully continue to improve.

One section of the Metamorphic trellis in the Parkland has collapsed and requires immediate repair – though each piece of the structure needs further attention as the rhododendron ‘wild’ wood sections have rotted away from sitting in the boggy ground here.

The ponds have again needed cleaning out – beginning from the Top pond and working down Middle and Claudi pools, through the Line Light Lade sections in the Parkland to the Lower pond – each has been cleared of weed and debris and silt raked up to keep water surfaces clear and running freely. The Temple pool is also cleaned and the willow and berberis by the island pruned back into shape. The little islet setting for the Albrecht Durer – Great Piece of Turf has been edged neatly to redefine its presence.

In the Front garden as elsewhere nettles keep resurfacing as much as they are removed – another constant round to keep on top of – particularly by the Seigfreid Line washing line and in behind the Last Cruise of the Emden. The area opposite the Nuclear Sail is the next to be hopefully totally reclaimed, as this entire area of bank on the edge of the lochan can be much improved.

A few more stepping stones have been put down in shady areas of the worn grass pathways in the upper wood – a full scale repair project will be completed in the winter months. It is apparent now that no amount of intervention will allow grass to be reseeded and establish in time for the garden being open – too many footsteps bring too much wear and tear and the muddy paths which result are slippery and unsightly. Hopefully the extensive range of repairs planned can keep future damage to a minimum.

Improvements are being made to the gable end of the house and around the pathway to the storeroom – a rogue sycamore is removed by the parsley chimney-pot planters and a couple of other misshapen stragglers taken out – the soft planting variety is extended – with foxgloves, bugle, purslane and bellflower (from thinnings in Julie’s garden) to provide more colour and form here.

The crown level of trees is lifted in the Parkland by the Virgil groves to clear a vista to the Flower Class Obelisk at the bottom.

In the Parkland also the blackcurrants which form the curved pathway are pruned hard back – they are pretty much past their best now, and ultimately will be replaced with new bushes – but the decision for now is to give them one last chance to flourish. Blackcurrant bushes in the Kailyard and Front garden have also received similar treatment. 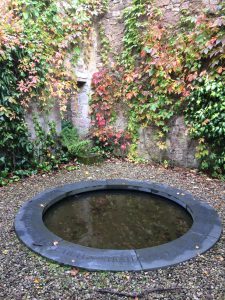 In the Hortus overhanging branches from outside are cut back and the fruit trees inside pruned back into shape – herbs are cut back in the par-terre beds.  Fruit trees are also pruned outside the Temple of Apollo – they are laden with fruit this year – but somehow always too late to fully ripen and provide us with a proper ample harvest.

There is much dead heading again as many plants reach end of their decorative cycle – in particular the astrantia in the Front garden which surrounds the sunken garden is clipped down to keep everything looking neat and tidy and preventing any further self seeding.

The soundtrack to our days now is filled with the gabbling and honking from skeins of geese as they pass overhead in V-shaped formations, patterning the mostly ever-greying skies.…