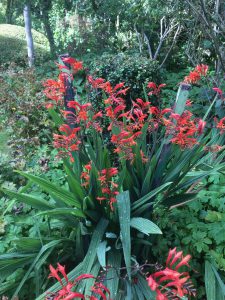 Morning dews now soak the grass pathways leaving shadow footstep trails around the garden. Colours shift and change. Cobwebs glisten like translucent hankies caught between the thorny branches of gorse. Sure signs of the change of season.

There is plenty to be tidied back – raspberry canes and blackcurrant bushes are pruned. The yew hedging and Huff Lane are again trimmed for the final time this season. Along with the box topiary these are the backbone shapes of the garden that will continue through until next year. The virginia creeper by the gable end wall of the house has been cleared from where it was clambering over the chimney stack and onto the roof so that it remains orderly. The leaves are now beginning to redden and fall.

In the Kailyard beds are dug over and finished crops lifted. In the Allotment too things are changed and planned for next year – globe artichokes are lined up in rows like sentries, herbs are formed into grid-like patterns. It is time to tidy the greenhouses and potting shed – getting ready for seeds to be sown now for autumn and ahead to next spring. These cleared spaces mean we are also ready to bring in tender and container plants from the garden and make room for storage over the winter.

The paint on the Claudi bridge has been touched up where it had weathered and flaked away – in the long term the whole surface could do with being scraped back and renovated.

Around the Corinthian capital by the top pond some more purslane has been planted, along with bugleweed by base of the 1794 urn. These are really the ends of any woodland colour for the season as for the most part now mushrooms and fungi proliferate.

The top pond has been weeded out again and a couple of overhanging trees on the bank removed – a patch has been cleared for another go at establishing purple loosestrife in this area – as where it has now taken – by the Arch bridgein the Parkland and by the lochan sluice, it is still bringing some surprising late flowering.

Branches overhanging the Hortus have been cut particularly where they are stretching over the circular Cloud pool.

There has also been a fair amount of natural selection in terms of woodland management. A fierce storm sweeps through bringing tree losses in the front Roman garden, by the Top and Middle ponds, in the Temple garden by the Pyramid and Schiff shell and in the woodland in front of Apollo and Daphne. Incredibly there is no damage to report to any of the artworks as all the limbs which came down avoided potentially disastrous contact with the objects underneath. There is much clearing to be done to get all back to normal – all that remains now are the pile of ashes and a few charcoaled stumps from a huge bonfire.

One other victim of the winds – the flag is in tatters where it was slapped about on the pole and will need to be remade for next year.

All of the artworks have been given a clean in preparation for their being covered for the season – which will hopefully be completed quickly while the weather remains dry and good.

In front of the woodshed an area has been cleared of the last of the logs from the original ash tree – underneath the Morris Finlay directional sign has now been sown with wild flowers – and the old logs moved into little wood which looks more and more settled and in its rightful place.

Works to renovate the water system have begun, replacing the old reservoir tank and installing new pipework from the spring to keep a free flowing system going with ample supply.

So we reach the end of the visitor season – the gate closes, the garden goes on…