Peter Manson (born Glasgow, 1969) is a poet and translator of poetry. He was one of three artists on the Sharing Little Sparta residency programme in 2016. This latest publication in our digital archive is based on blog posts first published in August and September 2016.

Manson’s books include English in Mallarmé (Blart Books), Poems of Frank Rupture (Sancho Panza Press), Adjunct: an Undigest and For the Good of Liars (both from Barque Press), and Between Cup and Lip (Miami University Press, Ohio). Miami UP also publish his book of translations, Stéphane Mallarmé: The Poems in Verse. 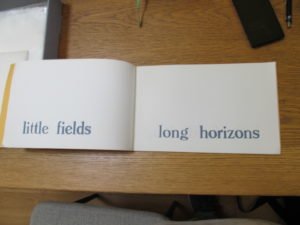 “When a given poem exists both as a paper publication and a structure in the garden, it’s often the paper version that is the more self-contained object. Finlay often adds a line or two of contextualising information, at the end of the booklet or on the back of the card, some essential reference that makes the work jolt into meaning. You can’t really do that with a piece of sculpture in a garden, so part of the meaning of the works at Little Sparta has to be brought to them from outside, whether from the Visual Primer or by a friend in the know .”

“When I arrived at Little Sparta, I knew I needed a guide to lichen – of all the volunteer laureates of the garden, the rosebay willowherb and the fringe cups, only the lichen are entirely anonymous to me. I bought a copy of the Observers Book of Lichens on abebooks. It’s an earlier edition, from the 1960s, not as good as the 1977 one I had (which is described, in the Observers Book of Observers Books, as ‘The best beginner’s guide to lichens available, and one of the best nature titles in the series’). I still don’t know one lichen from another.” 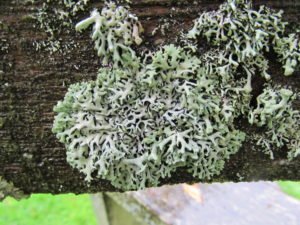