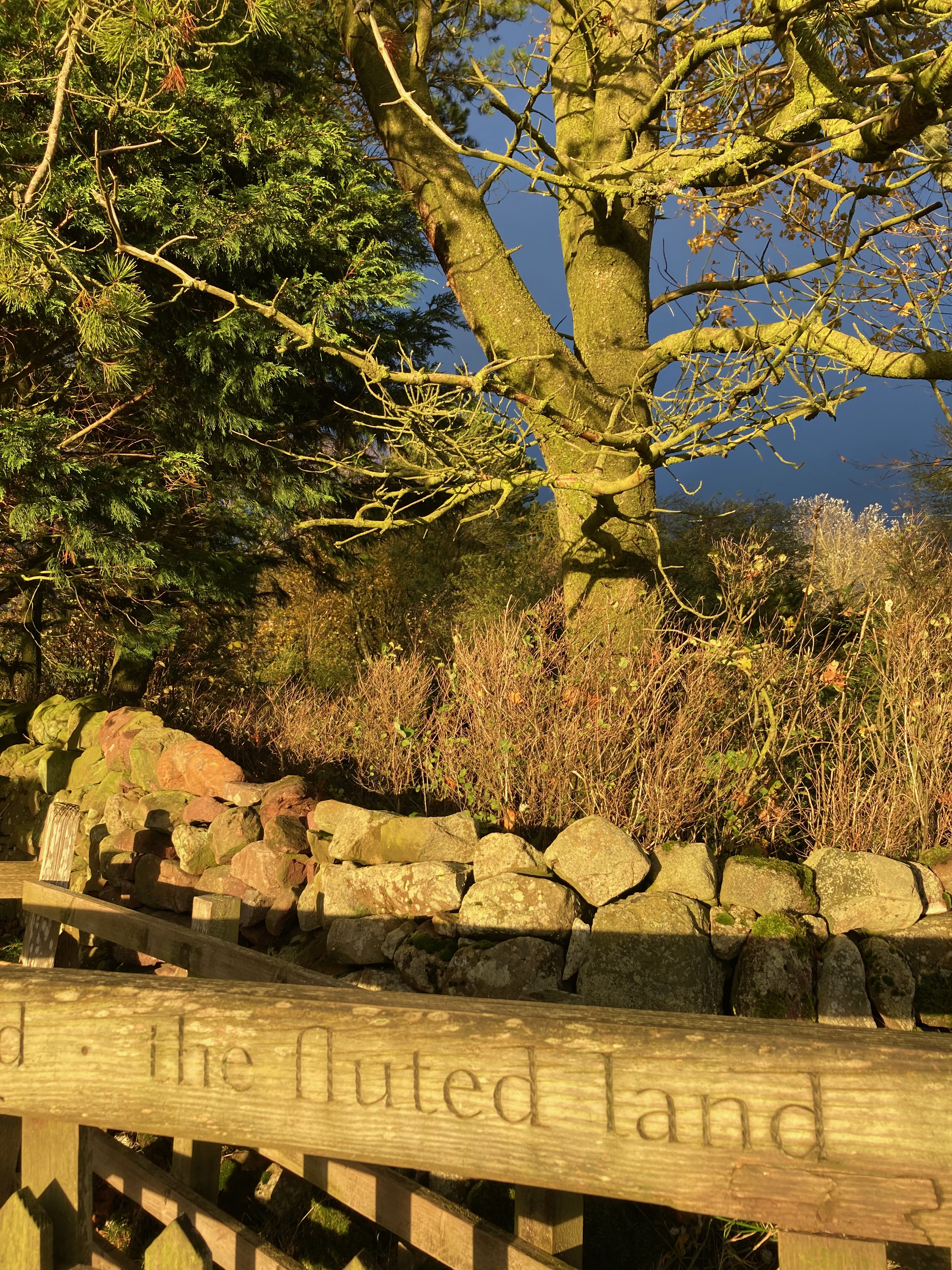 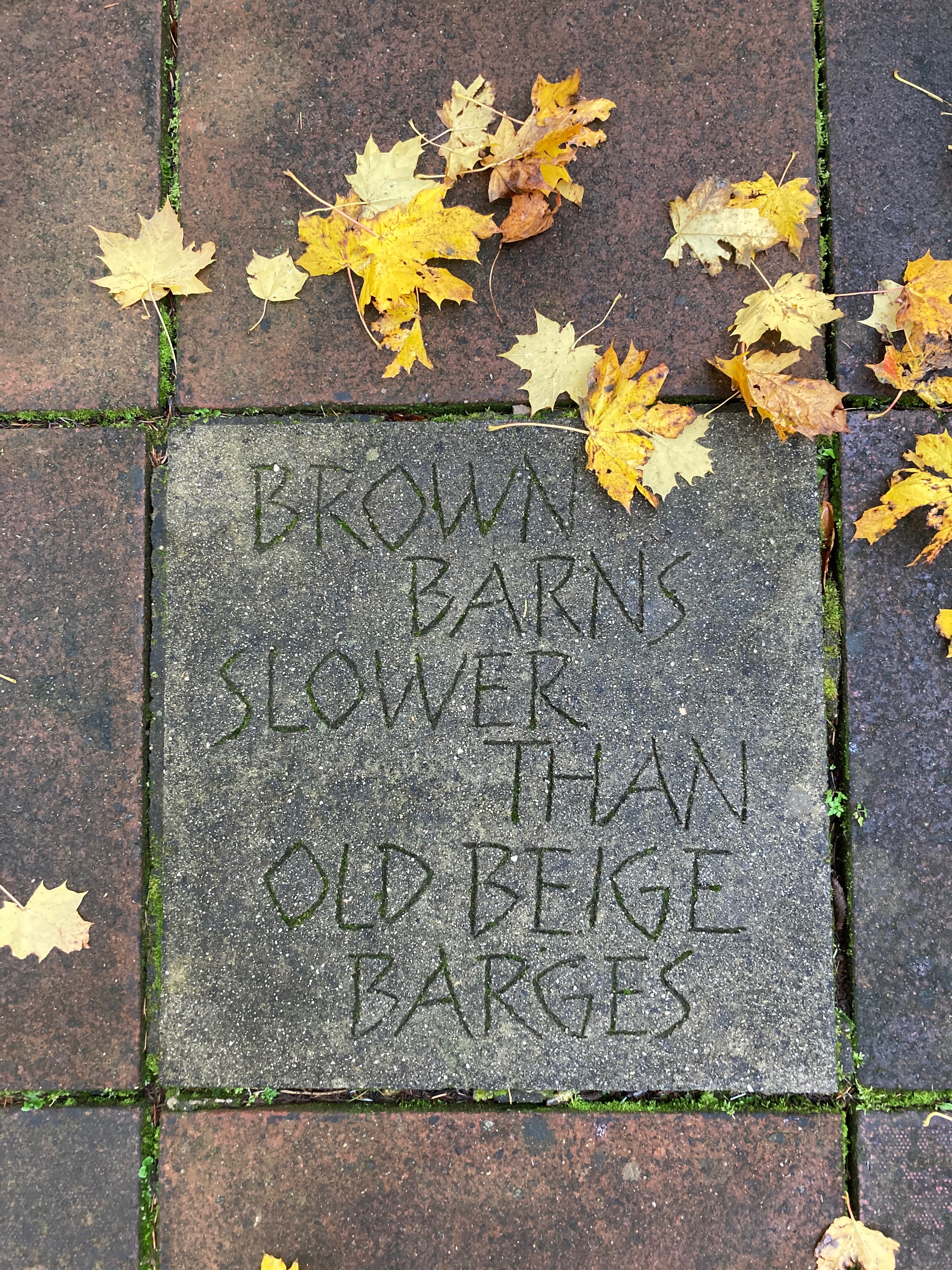 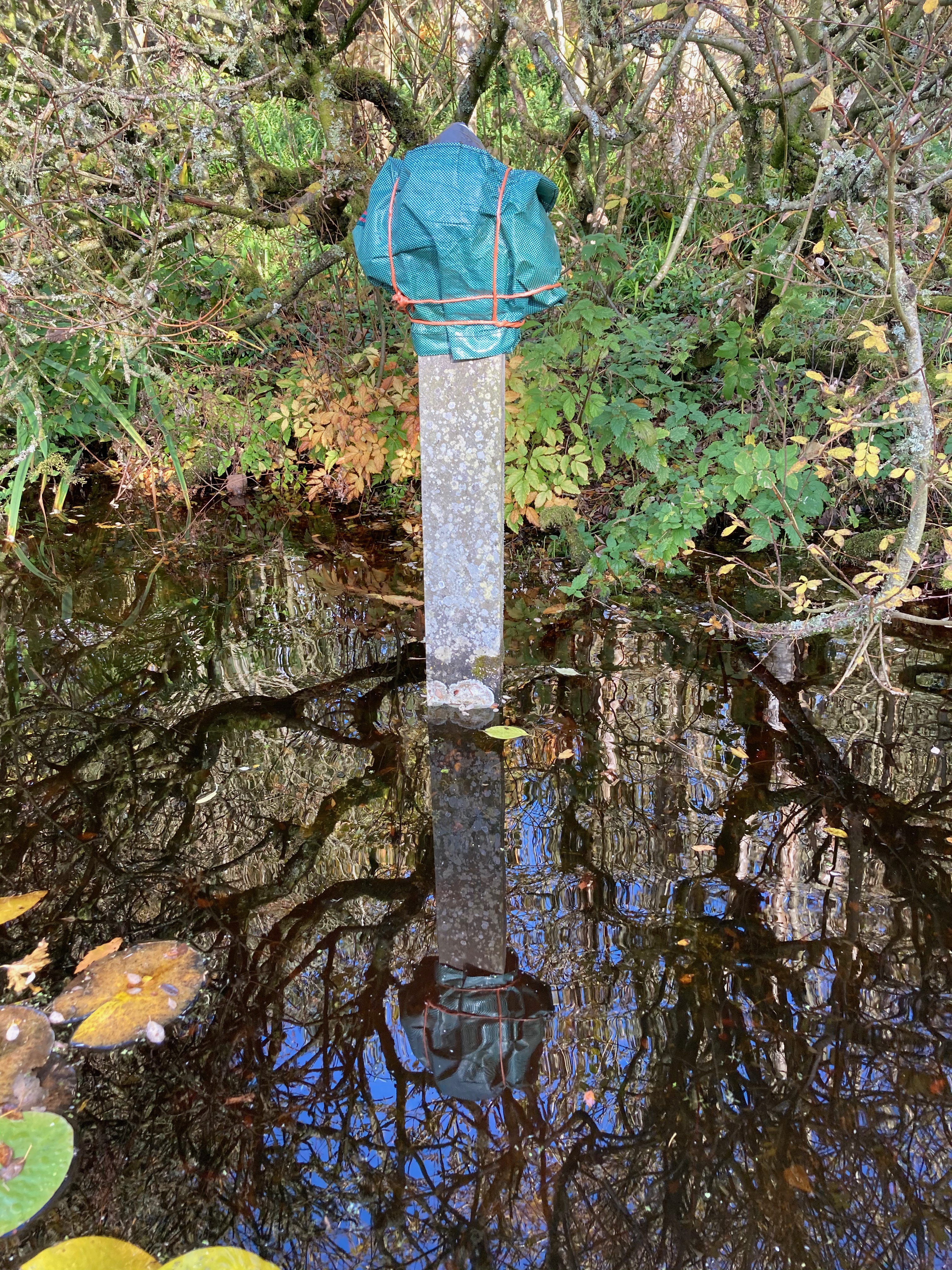 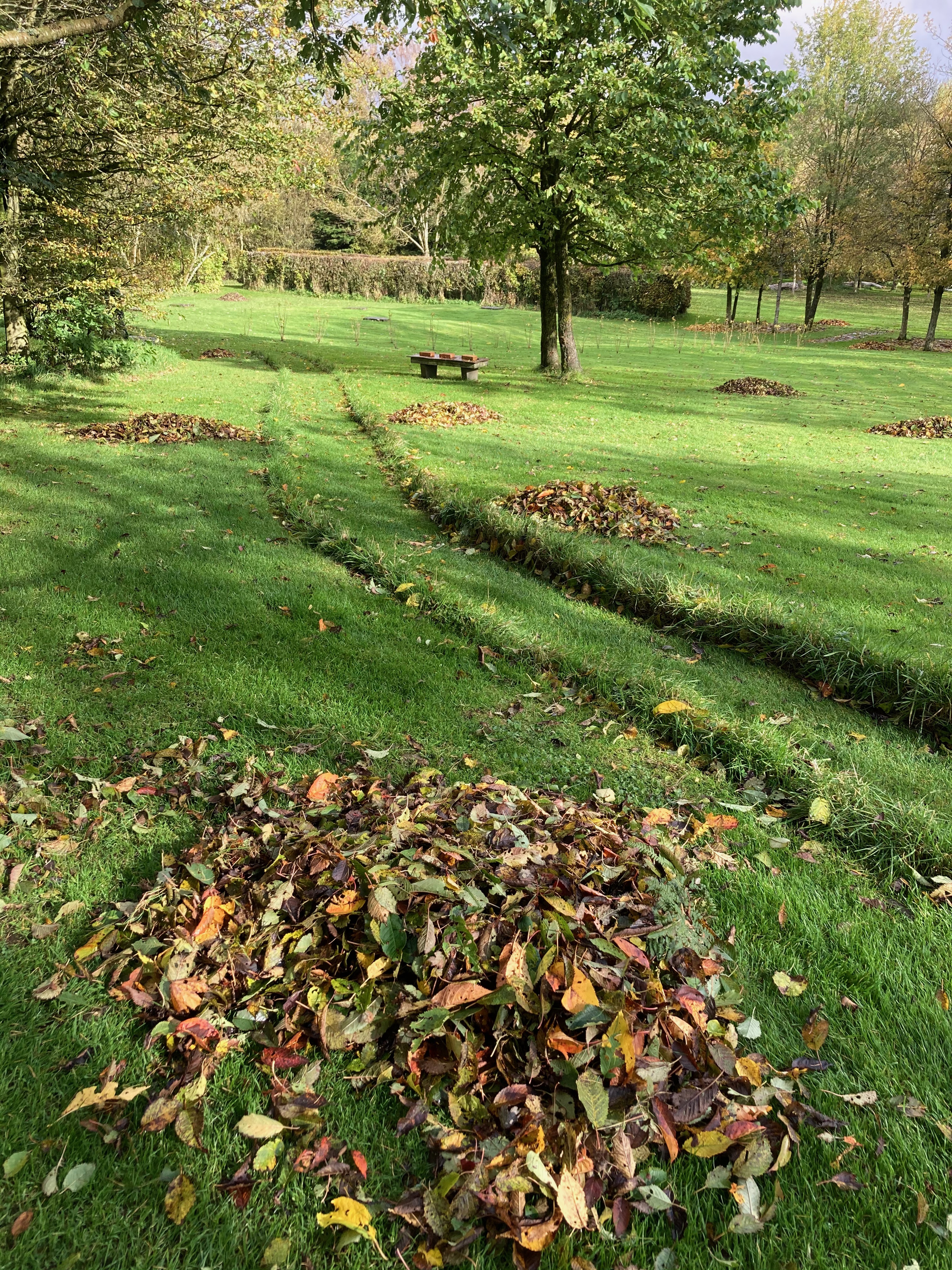 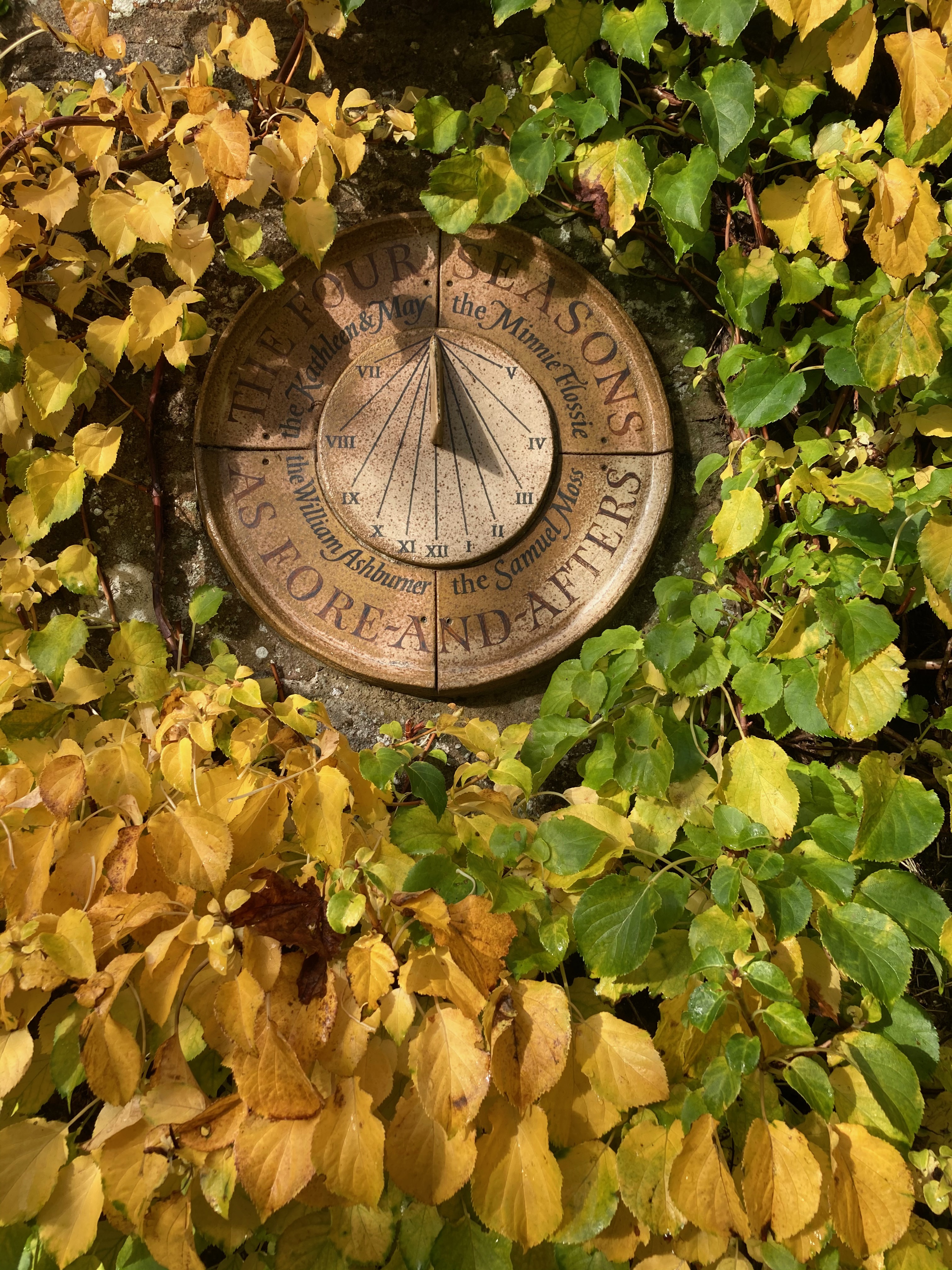 The most visible seasonal change in the structure of the garden takes place this month as all of the artworks are covered, brought into storage or packed away. It takes about a week of rushing round between showers to get everything prepared for the winter ahead. A curious shift in the familiarity of objects – muffled forms, blurred edges, hidden words.

The weather too of course plays its part as the days become colder, wetter, darker. The clocks go back – time won and lost.

There is plenty of other tidying to concentrate on – the greenhouses are used to store all of the terracotta containers, shelves now jammed full of plants finished and seedlings coming on.

Plants from the conservatory have also been moved out – the jasmine and clematis, the evergreen honeysuckle and the golden hops – this last now planted out by the woodshed at the entrance.

Roses around the Kailyard perimeter are clipped back, with a few cuttings saved to bring on for new plants, and by the Camouflaged Flowers on the hillside the cotoneaster is pruned back into its wave-like forms after it puts on a profusion of red berries.

By the outlet sluice for the lochan, the wild flower area is strimmed down and cleared ready for next year, the flag iris too is cut back from where it was encroaching into the sluice structure and suffocating the intended open effect of the perimeter edge.

From the compost heap mulch is spread over the beds in the Front Garden, the strawberry patches and containers, and in the Hortus parterre beds the roses and herbs are given a top dressing.

Throughout the garden all the waterways are cleaned out having become clogged up with fallen leaves and debris – the edges redefined, the water cleared – all running full with the amount of rain and a burgeoning spring source. The ground is very soft and sodden – in the lower end of the Parkland in particular each footstep squeezes out a new puddle or muddy divot.

The island in the Lower pond – L’Ile des peupliers – is cut down again, from where it was tight packed with flag iris, so that the central tree is freed clear and solitary, ready for when its defining tree plaque is tied on and re-installed in the spring.

Astrantia in the Front garden around the sunken garden and through the Temple garden is cut back along with astilbe and other perennials which have gone over – more fodder for the shredder and compost heaps. In the Allotment and Kailyard all the woody herbs are also chopped down and the spaces tidied out. Raspberry canes are cut down leaving this years growth to hopefully bring a better harvest next season – gardens are always for next year….

In the car park a new line of double white flowering hawthorn trees – Alba Plena – have been planted out in a problem wet area – both to preserve this space from cars parking and churning up the ground there, but also to redefine and announce the arrival point of the garden. A mucky verge becomes a composed space.

New yew hedging is also planted and extended along the top end of the Parkland where it joins the Woodland garden – it has been difficult to establish here for various reasons – lack of light, dry ground, open to the wind – it will hopefully settle in, as it is the intention to gradually let this emerge as a more formal dividing line between the spaces and a softer backdrop to artworks positioned there. Then the worn old post and wire fencing can be removed – it is a long term project worth preserving with.

Much of the time though is taken up by leaves – every day a new supply to be cleared away from the pathways, raked up into piles and saved for mulch or burned on a smouldering bonfire – though it is a bit of a struggle to keep this smoking away through all the wet days. It seems like one of those never ending jobs – and there are many more trees yet to shed their bronze and golden crowns.

Leaves and rain rattle down in succession, shards of colour, sparks of light.