Another month dominated by just about every form of rain – from drizzle through squally showers to downpour – the ground is saturated as a result, muddy and slippery. 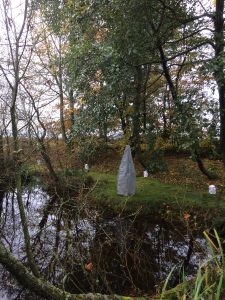 In between times though it remains a very busy month, as the artworks are first given a quick clean, and when at last the wet weather relents, all of the pieces are either covered or brought into storage for the winter. It is a complete transformation of the scene in the garden as it component parts are cloaked and hidden away.
Just in time too as the first frosts are also upon us, so at least everything is as secured as far as it can be.
The frosts and colder weather also trigger another main preoccupation as leaves fall from the trees – a constant round of blowing and collecting – some destined for leaf mulch, many more piled onto a continually smouldering bonfire, and the remainder just left as natural cover in the beds and borders.
The hedges of Huff Lane have been given a final clip to keep their structure in shape and to form a distinct linear backbone in the middle of the Parkland.
In the Front garden there are the beginnings of substantial improvements along the main entrance fishing boat path and in the adjoining Pompeiian garden – the beds are cleared out, mainly the removal of geranium which had become too dominant. The red-currants are pruned hard back and stray raspberry canes taken out and moved. The geraniums are used for replanting by entrance to the woodland by sea/land sundial and by the gable end of the Hortus. These should readily naturalise and spread here.
Also in the front garden the blackcurrant and raspberry formal beds are tidied and underplanted with strawberries and camomile, these should act as both weed suppressant but also a more formal decorative intervention, distinguishing these spaces from their immediate surroundings.
Clumps of golden rod are moved from the end of the front path to beside the Henry Vaughan memorial – here too the silver birch which had died has become entangled with honeysuckle around its trunk and branches and so becomes a honeysuckle tree…
All of the astrantia and stray perennials in front of the Temple of Apollo and  Julie’s garden have been cut down or dug out from where they had self seeded – these are transplanted along with many foxgloves and campanula to more suitable spots. The beds in front of the Temple of Baucis and Philomen are similarly tidied out – a large unruly crocosmia is removed leaving space for more cottage garden annuals next year.
All of the terracotta containers have been brought in and stored along with seedlings for overwintering in the greenhouses which have been washed down to keep everything clean.
A couple of small Irish yews which were being dominated by other planting have been moved from near the front gate to the gable end of the house by the store room – this area is now much more open and all of the other new plantings here should establish and provide much more colour and structure next year.
The grass in the Parkland was given one last quick mow at the beginning of the month and all of the grass edges to the pathways through this area have been strimmed hard back.
The Kailyard and Allotment are cleared out from all remaining crops – artichokes, mint, fennel, chicory and bergamot are all cut back, with plans for more formal plantings for next season.
All of the roses have been given a prune – in the Hortus, the Front garden and along by the Temple of Apollo – these have fared much better this season in terms of flowering, and there is always with the hope that maybe next year…
A new gorse screen has been planted surrounding The Tragedies of Dido by the end of the lochan – to make a more dense alcove backdrop to this work.
A continuing problem is the leak from the Artemis pool to the Middle pond – a trench has been cut to let accumulated flood water run back into the pond, but the actual source of the problem is not yet identified. It will require quite a bit more intervention to fully solve this issue – a consideration for the winter.
The compost has been turned over again, aerating the piles and all slowly but surely breaking down and making a useful new supply. 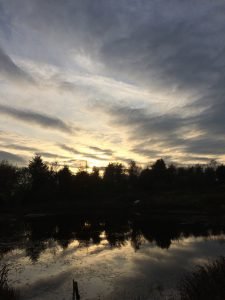 The pattern of days is now marked by ever changing colours – the leaves, the hills, the skies, the waters darken. A definite shift in seasons turning.