The promise of blossom. 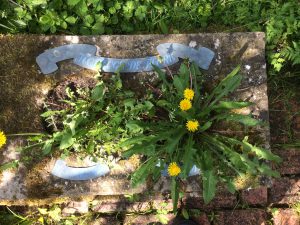 The tree canopy closes over, the garden is enclosed in green dappled light. For the most part it has been a mild month, bringing lots of vigorous new growth. The bulbs have now passed over, and the beds and undergrowth are starting to fill out their familiar forms.

The long task of cleaning all the artworks was begun, then brought to a halt (for risk of frosts), by a brief cold snap early in the month, but was completed soon after. The changeable conditions though have meant slow germination of the ever troublesome grass pathways in the woodland – it will be a challenge also to keep growth going once it starts being trampled over – and the fact that it is now in shadow from the surrounding trees does not help. Elsewhere the grass is romping away, and regular cutting, trimming and edging is needed to keep it all in check.

The hole in the bottom pond has been fully sealed where it was escaping – there is evidence too of water voles finding this a delightful habitat and making their homes `(and tunnels) there. For now, at least, all is looking and working well.

All of the other ponds have been weeded out, though will require attention again later in the season (the pond weed clearly benefiting from the mild conditions is growing at a prodigious rate). In the lochan, the system of using a boat and cutting the weed as low to the bottom as possible seems to be working well and retarding much of the regrowth, the water is clear and at least one brown trout has been witnessed rising and splashing back down below again.

There is much continuing hardening off and planting out both in the vegetable patches and of flowering annuals to add to the borders. Bluebells have been lifted and separated  and planted in the area around the 1794 urn in the wood, and small clumps of alchemillia have been planted behind the fishing boat milestones in the Parkland.

The large containers in the conservatory have been underplanted with white alyssum and red trailing geranium. White bell flowers have also been planted out between Henry Vaughan and  The Little Secret in the Front garden along with further annuals along the central borders and in front of the temples. Hosta pots in the Roman garden have been refreshed along with the formal rosemary containers in the Kailyard.

Purple loosestrife now lines a corner of the top pond by the aqueduct and will hopefully settle there to make a colourful waters’ edge.

For as much as there is to be planted there is an equal or greater amount to be removed with unwanted growth from ground elder by the redcurrant bushes in the front garden and under the raspberry canes. Nettles and willow-herb are the next phalanx coming through to be cleared in a never-ending cycle.

Netting has been placed over the new strawberry bed outside the Allotment – how the weather and light changes from now on will determine whether we have much of a crop or not. In the meantime we have an abundance of rhubarb – by the Claudi pool and the sea poppy fishing nets in the Kailyard.

All of the hedging has been given a tidy – the mixed perimeter hedge by the front, along with Huff Lane, the area around Line Light Lade – and also including a first clipping of the the box topiary forms and parterre beds in the Hortus.

Now as the garden is set to open there is a vibrancy in the air, the greenness zings with the promise of blossom, of fruitfulness.