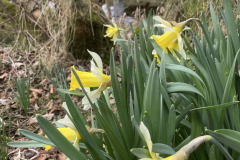 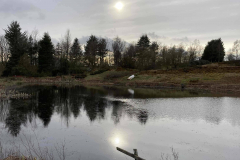 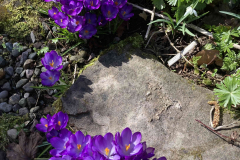 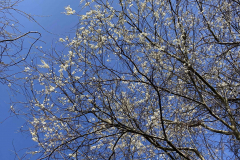 A month of preparations with the promise of spring – and as it nears its end we are blessed with a long spell of warm weather, clear blue skies which match the change in mood and season.

There are a number of jobs which need to be completed before beginning again.

The compost bins are turned over, the last cleared out and ready for use. This mulch is spread to extend the mound within the Little Wood which is home to medicinal herbs and where flowers are left to naturalise among the grasses, composed of some which randomly end up there, or surplus or stragglers moved from the formal beds in the garden. This then leaves an empty space ready to fill with this years clippings and clearings.

The Kailyard is cleaned out and dug over. A few of the globe artichokes have not survived the winter, even under their blankets of leaves – there are enough though to retain the formal spacing in a regimented formal row.

Potatoes are chitted – ‘Orla’, ‘Vales Sovereign’ and ‘Pink Fir Apple’, then planted out with a good fertiliser feed to get them going.

There are plenty of other things being brought on for this plot also – the greenhouses are packed full of seedlings in pots and trays – one side ranged for ornamentals and the other for veg and some herbs for the Allotment. Some of those in addition to all of the usual suspects are Lady’s Smock cuckoo flower, Valerian ‘Snowcloud’, Orlaya grandiflora, Bladder Campion, Stridolo, Caraway and so on…

The formal terracotta planters are set out – in the Roman Garden and the patio spaces in the Woodland garden, next to their related artworks. These are generally sheltered spots, so no risk from any late frosts.

The Allotment too is given a tidy – this area has benefitted from more light coming in as overhanging branches have been gradually removed and selected overcrowded trees taken out from the perimeter where it edges on to the Parkland. It has settled well now as an intended formal herb garden – a few empty spaces can be filled out with annual plantings.

The last of the winter debris is cleaned away, especially from the Parkland, any fallen dead wood, branches and twigs. The grass is then gone over with the mower on a high setting to blow away as much as possible of any remaining leaves and mess. The ground at the lower end though remains soggy and here again are a few more smaller willows which have tilted over beyond rescue. Cuttings taken will bring on replacements soon enough.

The formal lawns in the Front and the Temple garden get a similar high set cut just to tidy things up.

The inscribed wooden benches still in storage have been treated with teak oil, the Fructidor stone baskets from Julie’s garden are repainted, along with the Lemon baskets – Silence After Chatter / The Astringent is Sweet, all are now ready to come out of storage when garden is unwrapped.

The five slates on the roof of the Temple of Baucis and Philomen are re-gilded, denoting the metamorphic change in Ovid’s tale of the thatched roof of the peasant couples cottage turning into shining gold.

Bright days change scenery and bring colour to dormant spaces – everything is unfurling. From snowdrops passing over now to more vibrant crocuses, daffodils poking their heads out in groups throughout the garden and bright sparks of furze on the hillside. Sounds change also – the constant chorus of frogs in all of the ponds, and new patterns of birdsong fill the air. Take a breath, relish this moment.