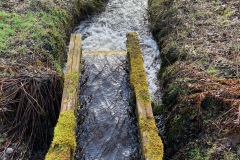 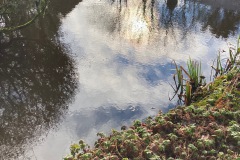 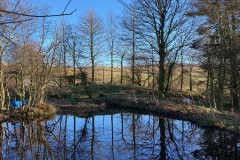 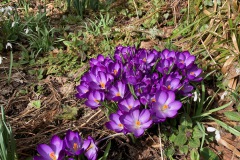 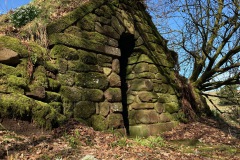 New beginnings all round.

There is still a sharp coolness to the air as biting winds sweep through, but this is balanced out now by more brighter longer days. A further round of seasonal maintenance jobs are completed as we move into spring.

The entrance gate The Fluted Land gets raised and levelled, though the gateposts themselves remain squint, sunk over time – but it is a compromise to keep the original going a while longer.

The wooden footbridge to Apollo and Daphne is replaced with new sturdy sleepers to provide safe passage and the decaying Metamorphic Trellis has been patched up as best as possible. The missing ‘wild’ section has been remade using our existing supply of seasoned rhododendron wood – this has now exhausted the material we have available and long term it will have to be entirely remade from scratch. The other sections have been reinforced to sit as level and firmly as possible.

A small collapsed section of drystone wall outside the Hortus is rebuilt and the formal beds in here are topped up and the roses given a feed, more in hope than expectation that this year will bring an abundance of fragrant flowering…

The Claudi bridge is given another make do and mend repair to one of its ends which had crumbled away, and the entire structure is repainted. A fresh coat of paint is also given to the Platonic cube form, as is Cupid’s arrow lodged in a tree in the Woodland garden, each now looking fresh and bright.

The Kailyard and Allotment beds are top-dressed with a good quantity of seaweed based soil improver. These are cleared out and waiting ready now for a new season of produce to bring on.

Throughout the garden the compacted areas of worn grass pathways have been filled out with topsoil and then a extra layer of more sandy top dressing applied ready for reseeding – though it is still a bit too cold for this at the moment. There is more work still to do in other boggy areas – the drains are cleared at the bottom of the Parkland from the lochan, diverting some of the accumulation of water, but there are other sections of pathway where new additional drainage will be required. The lawn areas in the Parkland and all of the paths are raked up and cleared of fallen small twigs and branches.

The completed re-levelling work on the track up to the garden does seem to have had a positive impact, there has been no more flooding or washing away of the stoney surface. Further works are planned for improvement and extension of the carpark area.

Elsewhere in the garden it is a busy time too, as greenhouses are washed down – some of the container plants which have over-wintered here are put back out in place and the newly cleared shelves filled with seed trays and pots bringing on seedling veg and flowers for the season. This is always a moment of transition and promise.

The opportunity is taken to split and reposition some of the herbaceous plants in front garden and the beds here are given a clean and tidy.

The snowdrops are starting to go over and the more exuberant display of crocuses take their place. By the end of the month the first of the daffodils have begun to unfurl their yellow trumpets – much later here than everywhere else. Frogs have been in full chorus in the lochan and other pools – work has to happen around them as the ponds are given a first clean out of accumulated winter debris. The water supply at the source is cleared of silt, and the Scallop shell supply to the Temple pool is running clear. The overflows and exits to many of the pools are reinforced or repaired so the they too run freely again and levels are maintained.

The main intervention in the garden this month though (and for the coming months) is the removal of the old conservatory and its planned rebuilding. The existing structure is taken down without much persuasion being required – the UNDA patio pavers are lifted and the pink cube form moved out of the way. The new foundations are already in place, so the shape of change can be seen mapped out on the ground. It will continue to be a bit disruptive for a while – until the new building reveals itself. New beginnings all round.