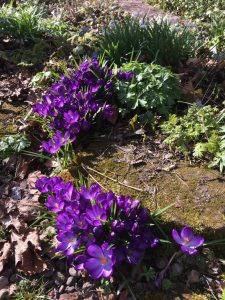 The first true glimmers of springtime as the cycle of nature moves on in the garden.


There is much work going on to deal with residual damage caused by water-logging over the past months. A sequence of French drains are dug out by the Middle and Top pools. The ground is holding so much water that it seems to be finding new routes underground along tree roots or other weak spots and these areas have become saturated – the drains are proving effective however, in allowing sitting water to seep out – in particular the section of pathway by the Golden Head of Apollo. As the ground eventually dries out, hopefully these areas will now be consolidated and less prone to future problems.


A renewal has also been made to the Temple pool inlet by the scallop shell (Caddis Shell / Goddess Shell) – a section of new pipework has been brought down along the perimeter of the garden from the spring source. The blockage or collapse in the old existing pipework just could not be found or cleared. The new section almost works too well now, as the supply is more than ample – from being the pond we could not keep water in, it is now overflowing, but the level can be easily regulated.


Sand and topsoil have been spread out over sections of worn grass pathways where rubber matting was laid, again to hopefully sort out a long existing and recurring problem – these areas will also have a top dressing of pre-seeder fertiliser applied before grass seed is sown in next few weeks once milder days are more assured.


The seasonal job of jet washing has begun – of the Front garden and Temple garden – there are still some areas to finish off here and at the entrance to the Wild garden – it is a lengthy but satisfying task as all the brickwork paths and patio areas are refreshed and sparkle in their true colours.


Alongside this work, repairs have been made to broken areas of brickwork paths along with repointing in badly worn areas – especially around the circular base of the Seigfried Line / washing line and the steps at the base of the Hand Grenade gate piers. Here too, many years worth of accumulated soil is cleared back so that the form and brickwork pattern is more distinct.


All paths eventually grow mossy. In some places it is welcome as it makes a for a soft cushiony passage – in others it becomes problematic as stone and brickwork are worn away or become slippery. Some areas are cleaned, others are left, all things in proportion. Where it has crept out to where it is not wanted –  on the gravel path to the Claudi bridge – it is also removed further back so that a sense of formality remains.


There are days of spring sunshine but just as often it is cold and grey – and in some days we lurch through just about every conceivable variation from hour to hour – rain, hail, sleet, sun, snow – all happening in the course of a morning.


There is the definite promise of new growth with green spouts everywhere and fresh buds in the hedgerows. The snowdrops are just about over, daffodils take their place.


Many of the pots of seedlings have been taken out of the greenhouses to acclimatise before being moved to new positions or to areas that need filled out with additional plants – there is a legion of ox eye daisies ready to populate the hillside.


In the ponds and lochan there is a frenzy of activity from mating frogs, and thick jellied splodges of spawn line the waters edge, which brings back another familiar visitor to the garden – the heron – here again for rich pickings.


All of this is happening, of course, against a background of events which has reshaped the very fabric of our lives. There is an order to things, just as there is disorder, and a future which for now seems almost unknowable.