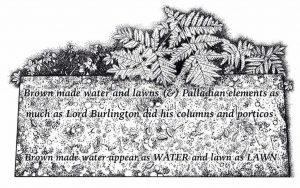 An essay by Dr Patrick Eyres.

This drawing, by Chris Broughton (fig. 1), salutes the way that the craftsmanship of Keith Bailey articulates the poetry of Ian Hamilton Finlay. It was Keith’s understanding of sculpture, as well as his craft skill as a letter carver, that brought him to Ian’s attention late in 1975. As a poet who envisioned sculpture, Ian employed carefully selected collaborators in the fields of design and craft who could realise his ideas to his precise brief, in the appropriate manner and with consummate quality. Keith was a member of the Art Workers Guild and had a well proven professional pedigree. He had studied and taught at Manchester School of Art before joining the workshop of David Kindersley in Cambridge. There, in the mid-1950s, he fine-tuned his craftsmanship by working with the Kindersley team on the inscriptions within the thirty acre site of the Cambridge American Cemetery and Memorial. After he embarked on an independent career in 1957, he won notable commissions from patrons that included Downing College, Cambridge, and the law court rebuilding programme of the 1970s. For the latter he carved large, architectural coats of arms, such as those in Leeds and Liverpool.i 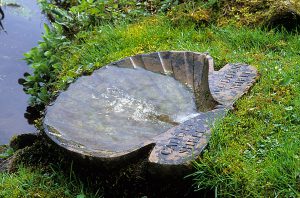 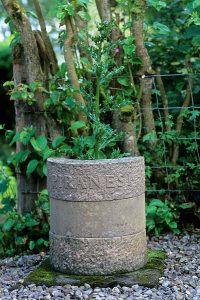 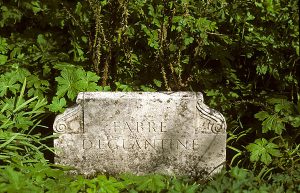 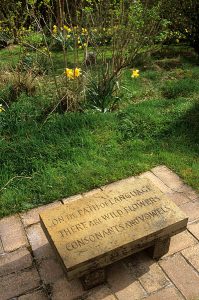 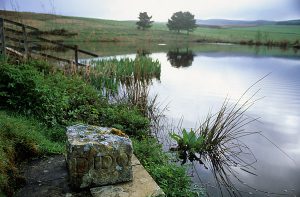 The catalogue of works at Little Sparta records that, between 1976 and 1995, Keith executed thirty-three works for the garden.ii In the sample reproduced here, we can enjoy the way that Keith’s exquisite craftsmanship animates Ian’s poetry – the spring, Caddis Shell, beside the Temple Pool (fig. 2); the tributes to cultural heroes such as Piranesi (fig. 3) and Fabre d’Eglantine (fig. 4); the bench inspired by The Path of Language (fig. 5); the signposts that enigmatically point the way to metaphorical destinations, Dieppe (fig. 6) and Zur Siegfried Linie (fig. 7); the solitary invocation, beside the lochan, of those forlorn lovers of antiquity, Aeneas et Dido (fig. 8).

In due course, Keith carved in stone his Homage to Ian Hamilton Finlay (fig. 9). For Keith, this ‘wild stone’ was a memento that subsumed the pleasure of visits to Little Sparta and his admiration for the poet. It was also the epitome of his ideal mode of carving, direct and expressive (fig. 9):

I first saw the Homage a dozen years ago when I visited Keith at his studio in Cambridge. A potent presence in the studio was the number of stone prototypes inspired by potential or unrealised projects with Ian. These encompassed a variety of types of armoured fighting vehicle used by the German army during the Second World War. While we discussed his longstanding collaboration with Ian, Keith acknowledged that he regarded with a special affection the five ‘wild stones’ he’d carved at Little Sparta. He recollected that the term was used by Ian to describe a stone found in the natural environment, often on the moorside. Visiting collaborators would be invited to inscribe a stone spontaneously, on the spot. Keith particularly enjoyed the scope offered by these wild stones for personally expressive carving. A good example is the inscribed stepping stone in the middle pool of the Wild Garden, into which, during 1991, Keith carved Ian’s words (fig. 10):

RIPPLE n. A FOLD, A FLUTING OF THE LIQUID ELEMENT 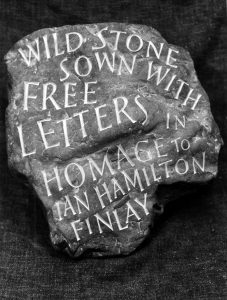 Through the chance, yet timely, intervention of Little Sparta trustee, Ann Uppington, Keith’s wild stone, Homage to Ian Hamilton Finlay, has been posthumously retrieved and, in September 2018, it was deposited at Little Sparta. Keith would have been thrilled. He would also be pleased that his fellow letter carver, Eric Marland, had been a catalyst and that his friend, Neil Warmsley, had driven from Cambridge to deliver the wild stone. Neil was welcomed at Little Sparta by trustee, Camilla Toulmin.

When I compiled the checklist of Ian’s permanent landscape installations outside Little Sparta, I was surprised that the tally was as many as seventy-seven and that these artworks spanned the UK, mainland Europe and the USA. However, looking back over the checklist, I’m not surprised to find that Keith was involved in half a dozen of these projects. They include the prestigious commissions from the Forest of Dean sculpture trail (1988) and the Floriadepark at The Hague-Zoetermeer in Holland (1992), as well as Ian’s exquisite Improvement Garden in Stockwood Park, Luton (1991) and the Haus Bitz, Frechen-Bachem, Germany (1988). The other two were for private (1976) and public (1978) UK commissions for sundials.iii

On reflection, Keith acknowledged that it was the first of these that proved to be his most challenging project for Ian. Ronnie Duncan had commissioned a sculpture to grace his garden at Weston in Wharfedale. The project became protracted by the excruciating technical problems encountered in the course of 1976, 1977 and early 1978, which tested Keith’s skill to the utmost. Nevertheless, the correspondence generated by this project contains two fine tributes to Keith, which highlight the quality of his craftsmanship.

The first came from Ian, who relished the Englishness of the Yorkshire stone of Ronnie’s house and garden and, in particular, relished the appearance of Keith, who he described as:

… an English carver who I discovered – by the merest chance – just before Christmas [1975], and with whom I have completed a small work for our gallery; he is very proficient, and reliable, and it seems almost providential that he should have emerged at this moment (in that he is another aspect of Englishness which I greatly admire).iv 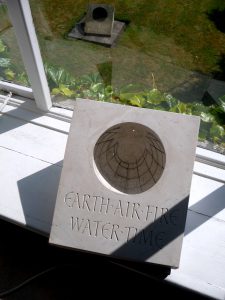 Ronnie’s patronage enabled Ian to realize his ideas about the rare type of sundial described by Vitruvius as an anteboreum.v So far, all his sundials functioned through the traditional means of a shadow cast by the projecting gnomon. The anteboreum, as the Latin indicates, is positioned ‘before’ or ‘facing’ north so that the hour lines receive light from the south. Inscribed within a concave hollow, the hour lines reveal time when illuminated by the shaft of sunlight shaped by the tiny aperture. Both aperture and sunlight can be seen in figures 11 and 12, and especially in Keith’s elegant maquette (fig. 11) that overlooks the anteboreum from a broad window-ledge upstairs.

Ian proposed the sundial as a representation of the four elements to which, as appropriate to a garden, he added a fifth so that the inscribed motto reads:

The typography of the inscription draws our attention to these elements – to Earth, embodied by the solid block of stone, and Air, which conveys the light of sun’s Fire over the rain’s Water, gathered in the concave pool below, to illuminate Time.

When the anteboreum was finally completed, Ronnie and Henriette were able to examine the work, and Ronnie’s letter to Ian stands as a testament to Keith’s craftsmanship:

We can report that EAFW & T surpasses our expectations. … We saw the sundial in Keith Bailey’s studio standing upon jacks. It gives an impression of great massiveness and strength combined, curiously, with a sense of fragility. This derives from the almost porcelain feeling of thinness where the huge scoop of the bowl reaches the aperture. I am quite sure Bailey has achieved a remarkable technical feat (quite apart from the nightmarish risks involved) in drilling out the hemisphere to the wafer-thin distance of the cut-away back, and then, having filed the indentation at the back, completing the clean hole in the aperture.vi

However, it was with these words that Ronnie also identified the difficulties that Keith had so patiently resolved, but which nonetheless deterred Ian from attempting a further anteboreum. 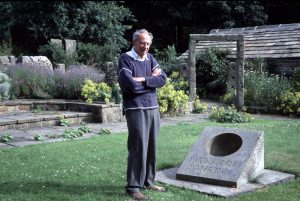 Over the years, Ian had only seen the anteboreum in photographs. Then, in 2003, the post-agoraphobic, seventy-eight-year-old announced that he would visit Weston (fig. 12). To my surprise, he first turned up in Leeds on the pretext that, after so many pots of tea shared in his kitchen at Little Sparta, he wanted to have a cuppa with me in my own kitchen. After a pot to wash down the scrambled eggs rustled up for the peckish traveller, we set off for Weston. Needless to say, Ian was delighted to see the anteboreum for the first time. He especially remembered the finesse with which Keith had calmly overcome the challenges in order to realise a sculpture that has since become unique in Ian’s oeuvre.

ii See Jessie Sheeler, Little Sparta: A Guide to the Garden of Ian Hamilton Finlay (Edinburgh: Birlinn, 2015), with Robin Gillanders (photographs), Stephen Bann (foreword) and Patrick Eyres (introductions and catalogue), pp. 181-192. It is as well to note that the catalogue inadvertently awards Keith one too many works at Little Sparta. This is because the correspondence between Ian and Keith discusses work on the grotto during 1984. However, Ian superceded his original design with another in which the stone carving was executed by Nicholas Sloan. Unfortunately, when the catalogue was finalised, Nicholas was unable to confirm his contribution because his archive of correspondence had been flooded.