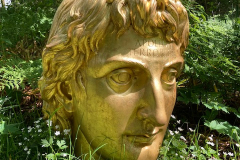 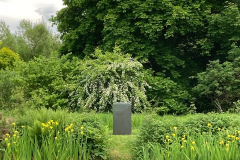 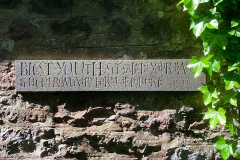 The start of summer – of sorts – and almost inevitably the moment our doors open the rain falls, so we have had to endure a stormy start to the season. Squally showers sweep through, then after a few calm days of promised sunshine the clouds gather again.

In one way it is useful to have everything watered in to refresh new or tender growth, though  labouring through dark grey days does not feel much like the high point of the year.

Work continues however, the usual round of grass cutting and strimming dominates – the narrow long grass pathways in particular need additional care as they flop in on themselves.

Raspberry canes are tied up and the underplanting in these beds tidied – chamomile has found a happy home here, so is being left to its own devices.

Further crops are planted out in the Allotment and Kailyard – each of these areas have filled out in a pleasing mix of order and disorder – it looks like it will be a bumper year for kale (appropriately), amongst others.

Flowering annuals (cornflower, cosmos) have been dotted in the beds beneath the fruit trees in the Hortus and a few more fillers also in front garden borders – there is a lull in between spring and summer blossom, but all looks fulsome.

There is some more successional sowing of herbs and veg in the greenhouses, pots, trays and shelves are still full of purpose.

In the Temple garden a bare semi-shady spot just alongside the Swallows Little Matelots patio has been improved, so that there is now a new bed consisting of bergenia ‘Bressingham white’, eurybia divaricata, symphyotrichum ‘Snow flurry’, lysimachia ephemerum. All of these should soon fill out and make a pleasant setting.

There have been continuing problems with the water supply source and a running battle with the cattle on the hillside, who have been using our spring as a drinking trough. New fencing is put up around it to keep them away, but their presence has also caused blockages in the pipework running down to the garden. A new 100 metre section of pipe is needed to bypass problems and keep the system running.

There are still pond leaks to contend with also – the Top pond in particular, no matter how many patch repairs are made along its perimeter edge always seems to find a new weak spot and the levels drop – a constant maintenance.

Galium (robin-run-the-hedge) is removed from the English parkland where it seeks to smother geraniums and other peripheral planting on the edges of the waterways and ponds. Along with nettles this marks the start of the annual assault on these invaders.

All of the box hedging is given a light trim to keep shapes looking tight and defined without overdoing it. As ever, to maIntain that intangible balance between formality and informality.

The main activity in the garden this month though was the planned Bioblitz (you can read more about this in the full report on the website and newsletter). This was a great opportunity and moment within the history of the garden to document the diversity of Little Sparta as a unique ecosystem.

We worked alongside partners from the Darwin Tree of Life project and Royal Botanic Gardens Edinburgh to produce a comprehensive snapshot of species in the garden, using iNaturalist app and platform to document the results.

A team of expert recorders – professional naturalists and ‘citizen scientists’- produced biological records of over 300 species. We hope to share further details of these records and this event later in the year. It is also a process which can and will be repeated in different seasons in the future to document further changes in the garden as a very rich and biodiverse habitat.

A reminder that there are always new ways of understanding to be explored, new ideas and approaches to be made in and of the garden.