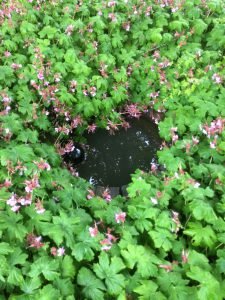 Nettles and willowherb dominate the month as they require constant weeding out to keep them under control. There is a concerted effort to clear whole areas to curtail regrowth and open up lost vistas.
By the Nuclear Sail and Claudi Bridge, also the front of the Grotto and Tragedies of the Dido class cruisers – there is room now in these spaces to extend existing planting (persicaria in front of the Grotto, foxgloves and new trees behind the Nuclear Sail).
There is more still to do – particularly on the hillside of the moorland, by the Camouflaged Flowers and in the Little Wood by the entrance – here there are also new plantings – of pink and white flowering dandelions, and purple mallows.
The stony path up to the garden has had its potholes repaired – twice – as heavy showers wash down the hillside – and that is an indicator of how the weather has gone for the month – a few tantalising days of sunny clear skies, then back to wind and pelting rain – a very mixed bag for summertime.
A new sign has been installed in the car park, and the oxeye daisies are beginning to flower there – a sweep of bloom to greet visitors to the garden.
All of the waterways have needed attention again – the Temple pond and the Claudi pool, along with the Top pond have all been weeded out and kept looking clear. The little burn running through the Parkland has also been trimmed back of all the overhanging growth so that the water course can been seen and heard more clearly.
A family of ducklings on the lochan have been nesting by the sunken column in amongst the flag iris. It is a pleasure to see them in their family group as they familiarise themselves with their new surroundings – but they soon fledge and depart.
The first swifts and swallows also put in an appearance swooping low over the water, and damsel flies flit about like little sparks of neon.
Early orchid blooms have appeared on the hillside by the boundary fence, and by the base of the hedge in Huff Lane. They seem more prolific this year so perhaps have taken a liking to conditions here.
There is further planting on in the greenhouses and planting out in the allotment and vegetable patch – parsley is placed out by the Parsley Lore bench, violas in front of the Epitaph and Last Cruise of the Emden in the Front Garden. Rows of camomile have been interplanted as companion to the raspberry canes – which are showing very little sign of producing much fruit this year. Berries on the redcurrants and blackcurrants by contrast promise an abundant harvest.
The daisy path is extended around the entrance area to the Kailyard, and a row of hostas lead the way to the Seigfried Line. Rosa rugosa is now in flower everywhere along the edges of the garden – a colourful demarcation and signalling of the presence of this place in the midst of wildness.
The tree canopy is now at its fullest and the intended effects of dappled light and shade apparent underneath – Finlay’s ‘glooms and solitudes’.
The compost heap has been turned over and  aerated – it is rotting down well – and a couple of robins have taken up residence here, lured by the abundant treats.
We have passed the longest day but still the better part of the summer now stretches out in front of us. This is the best time in the garden.