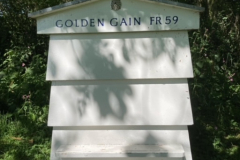 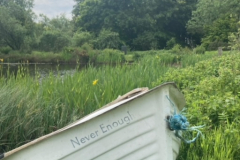 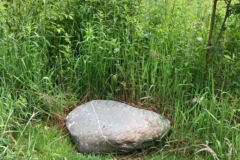 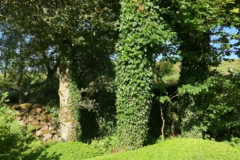 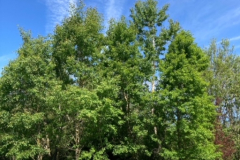 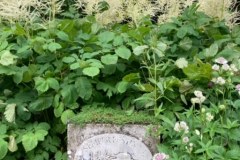 The annual ‘reign of terror’ on rose bay willow herb begins with a process of decapitating the vast swathes that have overtaken the hillside. It is also pulled up by the roots where not wanted or out of place, in particular around the perimeter of the lochan. This leaves the intended effect of the moorland area as sheaves of grasses which will soon turn to heather blossom – a much more fitting appearance. We will never be rid of willow herb, it has its place, but it simply has to be kept under control.

Another recurring problem which has to be kept in check is elodea in the ponds –  the Middle pond and the Temple pool are cleared out regularly so that the water lilies are not choked up.

The water supply from the spring has been giving further issues – the feed to the Top pond font inlet does not have enough supply as the water table drops during the prolonged dry spell. As a consequence the pipe is drawing in air, sputtering and gurgling as it reaches the garden. The aqueduct dries up and the whole system further down through the garden suffers. There are more repairs made to retain what water levels we have and reinforce weak areas.

The end of the month though does bring a change and as a weather front of heavy showers passes through the system corrects itself almost overnight. It is just one of the vagaries and limitations of relying on the spring feed.

Earlier in the month it is dry and windy weather which affects us more. There is further tidying and restocking of the Kailyard – the angelica is cut back down to the ground and is already putting on fresh new leafy growth. There are decent regular gatherings of salads, beans and some potatoes now ready for lifting. As elsewhere we endure a few days of heatwave – all goes limp – there is much watering of containers and beds to try and revive and keep things going.

Julie’s garden is given a good tidy – the honeysuckle seems to have done particularly well this year – both here and by the front of the cottage outside Finlay’s window. A few more additions brought on from seed are planted out – white valerian, corncockle and bladder campion join the established planting here, and enhance a romantic spot. Chinese forget-me-nots are also put in to the trough planter beneath the A Wild Flower Within wall plaque.

There is plenty more potting on in the greenhouses and successional sowing of salads mostly.

Black and red currants ripen and are in abundance, as are the raspberries, though these, especially the yellow berries on the wild canes on the hillside are stolen just as quickly as they ripen by the birds.

Astrantia around the outside of the sunken garden is in full flower forming a dense low hedge-like enclosure and contrast to this intimate little space. The Hortus is weeded out and the roses here are coming on well – the hot spell seems to have done some good as this area is now looking very established and flourishing.

Grass cutting and maintenance of the pathways continues. Nettles are removed regularly from the sides of paths and where they pop up in more formal areas to try to keep everything in balance.

The lochan edge and the hillside are festooned with meadowsweet in full flower, while the wildflower area by the sluice continues to blossom and change through the season.

For the first time we now have two working bee hives set up in the Little Wood, away from prying eyes or visitors, but in a good location and hopefully in time for the bees themselves to take advantage of the summer blossom and especially the heather coming into bloom. It is a bit of an experiment to see if they they will settle and be productive, but they are already clearly present and busy through the garden as sweet honey fills the combs…