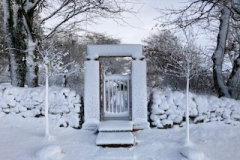 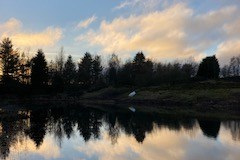 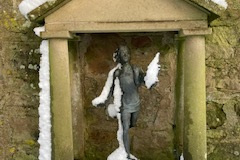 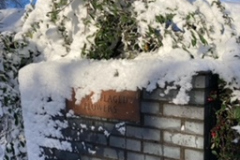 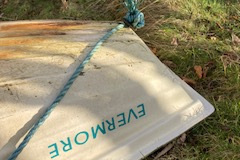 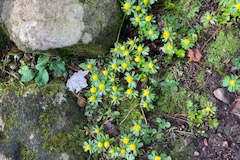 The old year ends and the new begins begins with storms sweeping over – a few trees and limbs down but not too much substantial damage – though it marks the start of a pattern of moody skies, colder days and brisker feeling weather.

With the ground covered or frozen there is little that can be done – the ponds freeze over and for the first time this season the lochan takes on its opaque glassy covering, then all defrosts again in a rapid increase of temperature (from minus 5 to plus 10 in one day) and all water courses running at full spate.

There is one substantial snowfall which for a day or so covers everything like a fantasy world blanketed white – but is gone just as quickly. For the most part the pattern of unusually mild weather continues. Then there are dark and dank days and others when the sharp light stretches through.

A new section of brick path is laid in the  Kailyard  on the well trodden route to the Loo. No amount of trying to re-seed this area has worked as the ground gets continually compacted here and grass never gets the chance to fully establish. The brick path is in keeping though, as it links back to others by the greenhouse and into the Front garden.

Waterways are kept as clear as possible from being clogged up by leaves and winter debris. The supply from the spring source freezes for a short time but rights itself and gets going again. The ground is very boggy around the back of the lochan and at the lower end of the Parkland. Not much can be done about this – but those drains which can be are kept running.

There are more losses from the sequence of willows in Parkland where they line the edge of the grassy inland sea wave mounds. Some are uprooted by stormy winds as they sit in wet ground, others are completely misshapen and have to be taken out or heavily pruned where they have leaned over and branches split from trunks. As a consequence this area is starting to lose some of its intended effect referencing paintings by Corot. Replanting will soon be required.

Some of these fellings are cut to log size and stored in the cleared out Woodshed, smaller branches shredded and the rest got rid of in a cheery bonfire.

Thinning out and pruning of damaged and overhanging branches continues to let more light into the Woodland garden from the overcrowded perimeter on the edge of the Parkland. Generally there is quite a bit of clearing to be done throughout, and this is part of the regular round.

The inscribed boat pavers from the Front garden path are brought in, repainted and placed out again under cover until they will be unveiled later in spring. All of the other painted stone works await refreshing.

Jet washing of all the brick paths and stone patios will soon be the next big job.

More accumulated leaves still need tidying and raked up – particularly the Italian alder in the Parkland which holds on to its leaves longest, and in the borders of the Front and Temple garden where the early spring bulbs are now starting to come through.

The first dots of colour are the buttery yellow of winter aconites to be followed soon by an even more fulsome display of snowdrops. One of those clear step sequences of change which define the seasonal momentum of the garden.

In the greenhouses all seems to be overwintering well, and soon thoughts will turn to another round of seed sowing for new years growth. Planning and planting – a heartening fancy on even the drabbest of days.