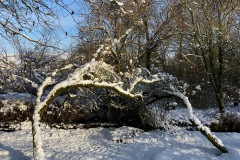 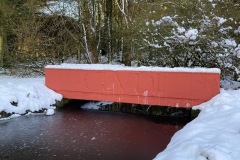 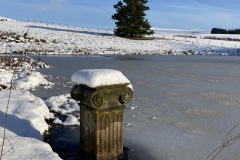 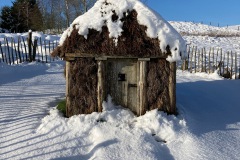 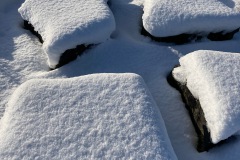 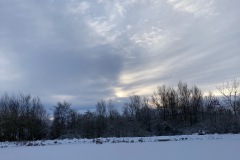 Snow is the mainstay of this month, as everything is whitened and covered over. There are bright days and the air is clear, but never enough for substantive change. As a consequence the water supply to the house and outbuildings is frozen, and also to the Scallop shell feed to the Temple pool. After chasing along the pipelines back to the spring source it is possible to get them going, but just as quickly they freeze again. It is best left now until the temperatures rise, and things can right themselves.

On other days there is a frozen fog which settles over the lochan and the moorland, muffling everything. It is as if the garden now exists in suspended animation – held in by the softened folds of the hills all detail is blanked out.

Even when there is some thaw it soon freezes again. There is already a huge volume of extra water going through the system added to now by snow-melt running off the fields, which brings familiar damage:  repairs which had been made to the Middle pond aqueduct are breached again, these are best left now to better days and a more permanent intervention.

There is further damage caused. Many trees are bent over with weight of snow and quite a few limbs split – in particular by Line Light Lade in the English Parkland. Here too the row of willows along the edge of the pathway (representing a scene painted by Corot) have suffered badly. The broken branches are cut back and removed – but many of these are now very misshapen and bent over – it remains to be seen if  they will bounce back and resettle themselves – or perhaps more radical cutting back or replacement will be required.

There are  some other minor losses in the woodland and by Claudi bridge – which cannot be crossed at the moment as it is blocked by the surrounding snow and ice laden shrubbery. Again, the only practical thing to do is wait and see what will need to be cut back and then this and all the other smaller fallen debris can be cleared away once the conditions improve.

The work on the track up to the garden has also inevitably halted. Where new drains had been put in before the end of the year it is possible to see the benefits as they direct the snow-melt away, but the main course of the track is still frozen over, and needs further repair and improvement. The only access now is on foot.

There is some work which can still continue inside – the inscribed wooden benches have all been oiled, ready to face the elements for another season once put back out in place.

Now at the end of the month as all shifts again, the first spikes of snowdrops are coming through, aconites flower yellow surprise out of the dark earth – and in that brightness the first promise of new beginnings.