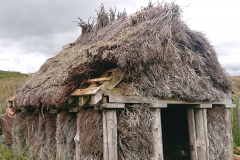 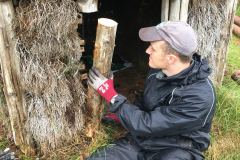 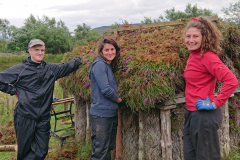 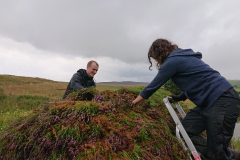 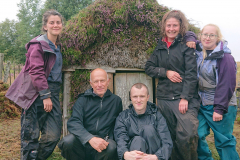 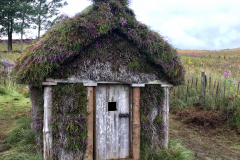 Based on Laugier’s notion of the Primitive Hut described in his Essay on Architecture of 1755, the goose hut looks back to the origins of classical architecture as well as exploring a common theme in Ian Hamilton Finlay’s work, the interface between Art and Nature. The hut originally housed a pair of geese, who were there to raise the alarm should the Barbarians (of the Scottish Arts Establishment) come marauding over the Pentland Hills into the garden at Little Sparta, just as their predecessors had protected the citizens of Rome. 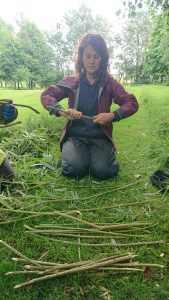 In collaboration with IHF, the goose hut was designed and built in 1982 by the architect Andrew Townsend, constructed with locally-sourced log columns and thatched using heather collected from the nearby moorland. As an ephemeral garden structure (in the eighteenth-century mode), the hut has required substantial repairs and re-thatching on roughly a ten-year cycle.

Recent work on the goose hut was carried out by the 2021 Scholars of the Society for the Protection of Ancient Buildings (https://www.spab.org.uk/learning/scholarship), Amy Redman (architect), Lucy Newport (engineer) and Libby Watts (architect) assisted by cultural historian, George Townsend and overseen by Andrew Townsend (who also worked as labourer, pulling bundles of purple heather from the hillside). Using skills the Scholars had learnt on their travels from a Northumberland heather thatcher, the roof and walls of the hut were re-covered with heather secured, in the form of sways and staples, using willow coppiced in the garden. Several badly-decayed columns were also replaced with new larch logs.

Although the hut has not been tenanted by geese for a long while, the head gardener has plans to re-introduce a pair in the near future.