Yet another month of very indecisive but very present weather. As elsewhere, more named storms rip through, but we do not sustain much notable damage – the garden seems well set in its defences. It is a reminder that the first thing the Finlays had to do when when they came here was to plant a wind break of trees, and even though this has changed and developed considerably over the years, that still remains the backbone of the garden, the reason why it can exist in this least hospitable of positions.

The winds are followed by further random snowfalls, the garden blanketed out again in pure white, which disappears just as quickly as it came. From one day to the next in the garden, its shapes and contours transformed.

Then after the freeze the thaw, and much flooding through all the watercourses – the ponds overflowing, swollen streams racing, the aqueducts and sluice gushing foamy water. As it all settles down there are areas of ground left totally sodden, sections of pathway that suck feet down into muddy puddles when unavoidably walked over.

The counterpart of all of this are days when it seems like springtime has begun – all of the snowdrops are still going, whole areas lit up by their presence – by the Siegfried Line, the Wild garden, the rooftop of the Grotto, surrounding the Temples, at the bases of still covered objects.

The compost bins are topped up from shredding a lot of the accumulated winter debris and need turned over, larger logs are piled up and left where they fell, the rest of the dead wood and the last of the leaves cleared from the Parkland make a bonfire.

There are other repairs – a collapsed section of drystone dyke by the entrance gate is rebuilt where it adjoins the perimeter of the front garden.

The blackcurrants in the Parkland serpentine path have been nibbled  – by deer presumably – though the only fleeting evidence of their presence is disappearing white rumps bounding over the fence and off up over the moorland. A few of these bushes might need to be replaced again.

The main job completed this month though is the jet washing of all the brick paths and formal stone patio areas, mainly in the Front and Temple gardens. It is always a surprise to see the hidden colours of these emerge again from accumulated green and dirt. There are other areas which deliberately remain mossy, certain paths which make more sense as they disappear into the undergrowth, certain settings for artworks which are left to naturalise. Formality and informality, order and disorder side by side.

The greenhouses are washed down also, one cleared out completely and readied for seed sowing – the next next big shift, preparing for spring. Some of the pots and containers which were overwintered here are tidied and put back out in place.

Finally, the golden head of Apollo is given a new hair-do – the top and back of his head which had become badly worn and unsightly is re-gilded, keeping him going for another while. In truth he probably needs a full facial also, but that will have to wait for another time.

The shortest month, but one full of incident and alteration, as the rest of the spring bulbs now start to push through there is a true step change towards longer brighter days. 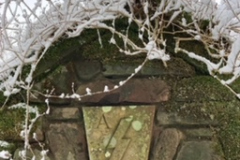 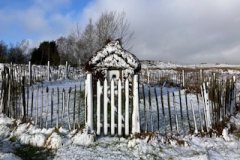 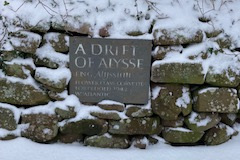 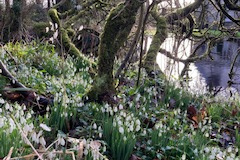 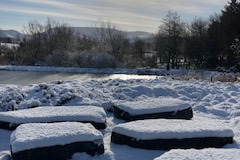 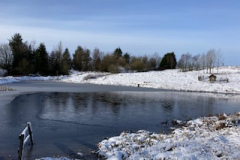 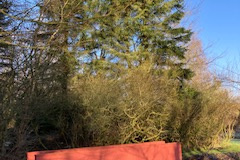 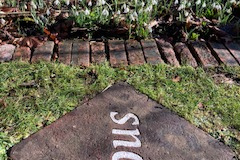