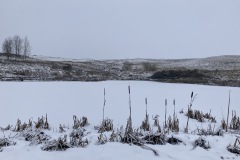 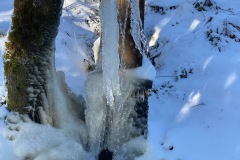 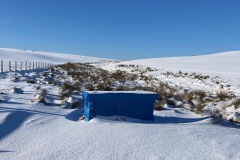 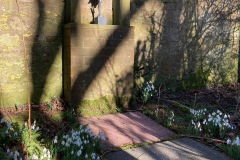 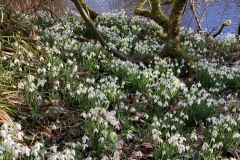 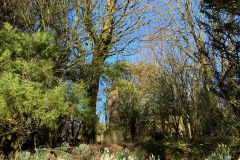 A month of two halves.

It seems strange to be writing now in springlike sunshine at the end of a month of its beginnings in freezing snow.

It is a month of two distinct halves as the wintry weather continued to dominate for the first couple of weeks with everything shrouded in sparkling white.

Then as if at the flick of a switch – exactly in the middle – the snow disappeared overnight, and there is a rapid increase to much milder temperatures and clearer skies.

But for the first half, the pattern continued of snow cover and frozen conditions. There were a few more losses of tree limbs weighed down by the snow and a blast of sharp stormy wind put paid to a few more – these are all cleared away, and make a roaring bonfire, a cheering and warming activity.

The work on the track up to the garden remains at a standstill – though the floodwaters coming off the hillside are both a test and an indicator of what drains and resurfacing will have to deal with.

For several days in the bad weather a deer is spotted taking shelter and refuge in the woodland from the surrounding bleakness. A heron sits solitary sentinel at the entrance of the burn into the lochan then flaps off in lazy flight, its patient but pointless wait for prey abandoned.

The Ice on lochan turns an opaque milky white, then crackles open and finally turns the colour and texture of wallpaper paste before completely melting and disappears.

It is this that marks the moment of change. The last half of the month brings clear fresh days. This weather allows for another of the larger maintenance jobs to begin – the  jet wash cleaning of brick paths and patio areas is started.  By the Front garden and the entrance way, Julie’s garden and in front of the Temple of Apollo are all completed. It is a time consuming and messy job – but always a good sign to look back after a days labour and see exactly where you have been.

Repairs are completed to the small sections of wooden fencing either side of the front gate The Fluted Land. The gate posts themselves will need to be replaced at some stage in the not too distant future – the gate is sagging badly off level now, the posts soft and rotten where the hinges are attached.  These will be reinforced as a temporary measure of make do and mend, but inevitably it is just a larger job being put off for another day.

It is possible now to see more damage to the limestone base of the gate piers – A Cottage A Field A Plough – the surface of the soft dressed stone is starting to crumble away even more since it is open to the ravages of weather – and there is no going back. A necessary repair of filling in these gaps will be made – but there are now also a couple of cracks in the brickwork evident as well. The whole structure is still stable, but again, long term intervention will become more urgent over time.

Planning for spring is underway – there is the usual round of renovations to take care of – the worn grass pathways and boggy areas of damaged walkways all need to be top dressed and reseeded. Certain sections may need to be reinforced with an extension of brick pavings. All of this work will start in next few weeks along with other delayed maintenance jobs and repairs.

The conservatory is cleared out as an era comes to an end. The setting for many a memorable Finlayan encounter – this very distinctive but unstable and leaking part of the building will be taken down in the next few weeks to be replaced with a new visitor centre on the same spot.

And all the while the dancing bright heads of snowdrops fill the beds, the edge of paths, form in clumps or swathes in the woodland where they illuminate even the dullest of days and shift anticipation to new growth and another season.