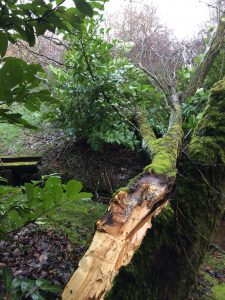 A month sandwiched between storms – Ciara and Dennis – and though we are not as badly hit as some areas there is still a bit of damage – a couple of trees down near the Middle pond aqueduct, one by the little Virgil bee bench (They lightly skim / and gently sip / the dimply rivers brim) –  and another couple by the top perimeter of the woodland. It seems this is happening just because the ground is so waterlogged and when the winds sweep through the trees tip over from being top heavy and having no root support. They are all cut up and cleared away – one benefit of this will be to bring more light into these areas – some of which were heavily shaded and congested – so maybe new grass can establish and some dormant underplanting reappear.

Everything is saturated – every step is squelchy and slippery – yet there is nothing that can be done to improve this until all the surface water at least drains away, and any badly damaged areas can be renewed. Rubber matting has been put down on the worst sections of pathways to try and consolidate the surface here so that when it comes to new top-dressing and reseeding the grass can establish itself and get going before it is trampled on again later in season.


For part of the month also we are heavily snowed under with drifting snow piling up especially along the track – when this melts and with the added rainfall, the top surface of the stony path is badly pitted with trenches and potholes – these are filled in and raked out a couple of times but almost immediately the repairs are washed away again. It is clear now that this is going to be a continuing problem and requires permanent intervention in terms of proper drainage channels being put in at intervals along the entire length of the track.

At the moment surface water from the fields just floods over the track, and once it cuts a channel into the gravel this all washes away.

Other water problems recur in the ponds which are brim full – in the Middle and Lower ponds the entrances to the aqueducts get worn away by the sheer volume of water passing through at these narrow points and need repairs and repacking with sandbags and mud sealant. The Lower pond in the Parkland in particular finds a old route out beneath the grass perimeter bank through holes which might again be the work of water voles or old tunnels from a rabbit warren. As much as possible this is packed tightly and we will just have to wait and see if it holds.


There are other ongoing patch repairs to different parts of the water system all the way through the garden – dams, overflows and outlets are the most vulnerable areas and need attention all the way down. 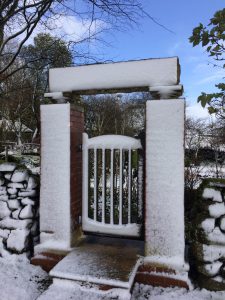 Blockages in the pipework from the spring source feeding the Upper pond have been cleared and it is running freely again, but the supply to the scallop shell and Temple pond which has not been working for a while seems permanently clogged up or is damaged somewhere along the line – all the usual methods of trying to pump it out to remove silt or airlocks is ineffective – the pipe is cut at various points along its course to see how far it is running – we have got as far as the Pantheon in the woodland but somewhere between there and the pond itself lies the hidden problem.

There is more work ahead to resolve this – but also a new supplementary supply will need to be run to the pond so that this recurring problem does not cause so many problems – in the summer as it currently stands the pond would just dry up, so it is an absolute necessity to add new pipework.

Elsewhere there is not much that can be done in practical terms in other places in the garden – sweet peas are sown in the greenhouses – and planning is in place for all the vegetables and additional perennial planting to be added to beds.

But this is really for other days to come. As much as can be done to keep the garden tidy and in preparation for the spring is being done – but we are at the mercy of the weather yet again, and can only hope for what changes the next months will bring…