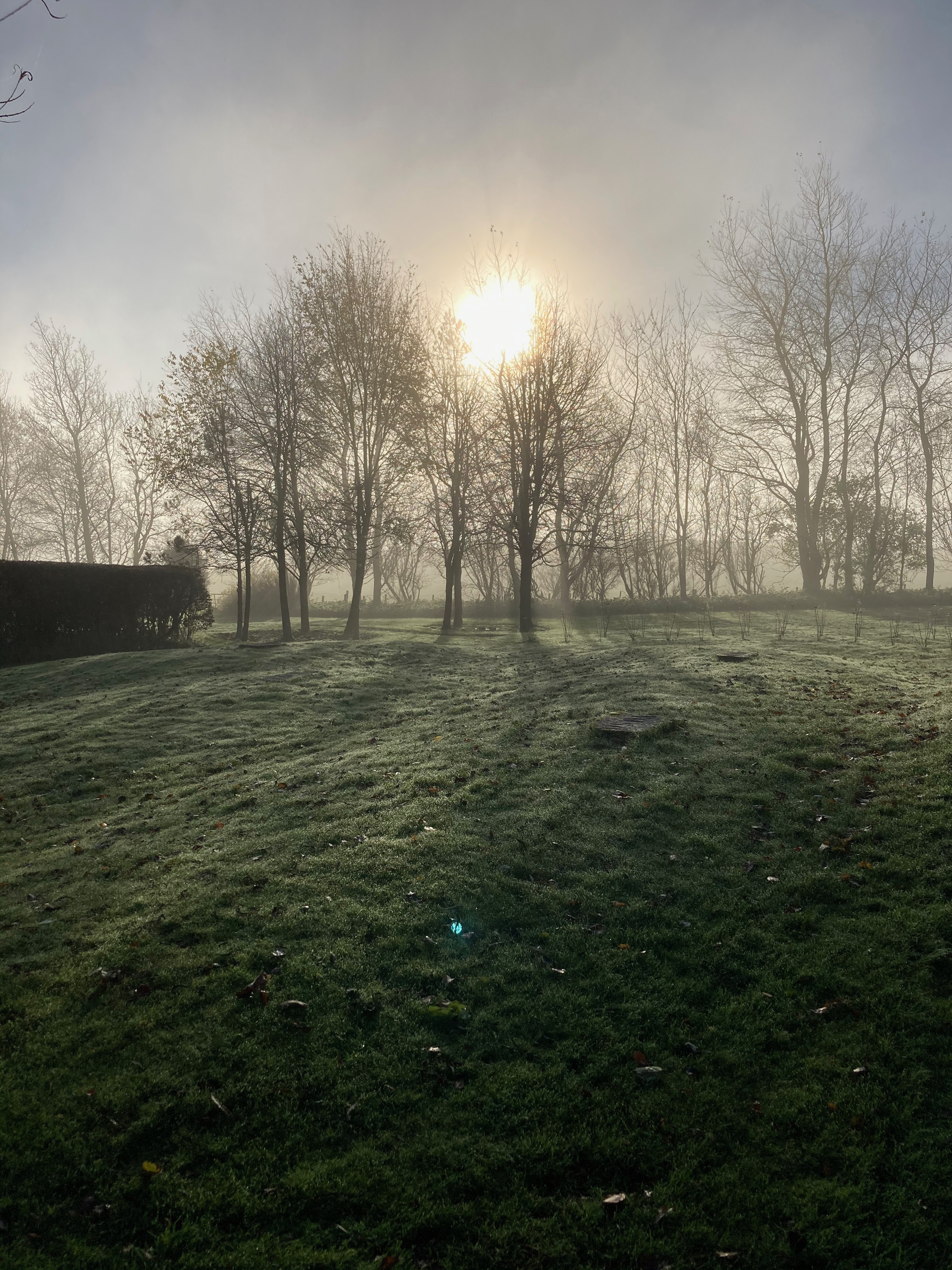 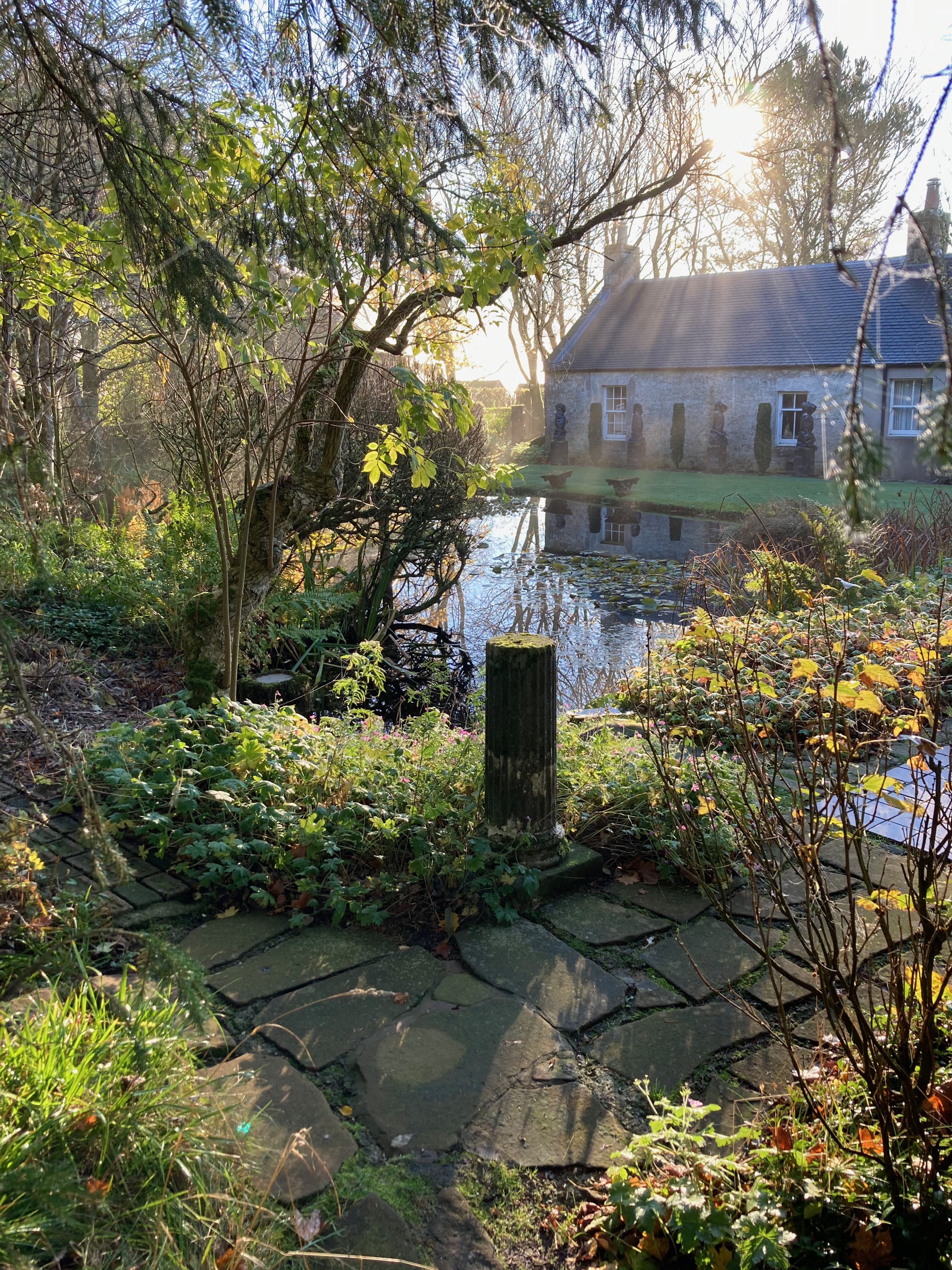 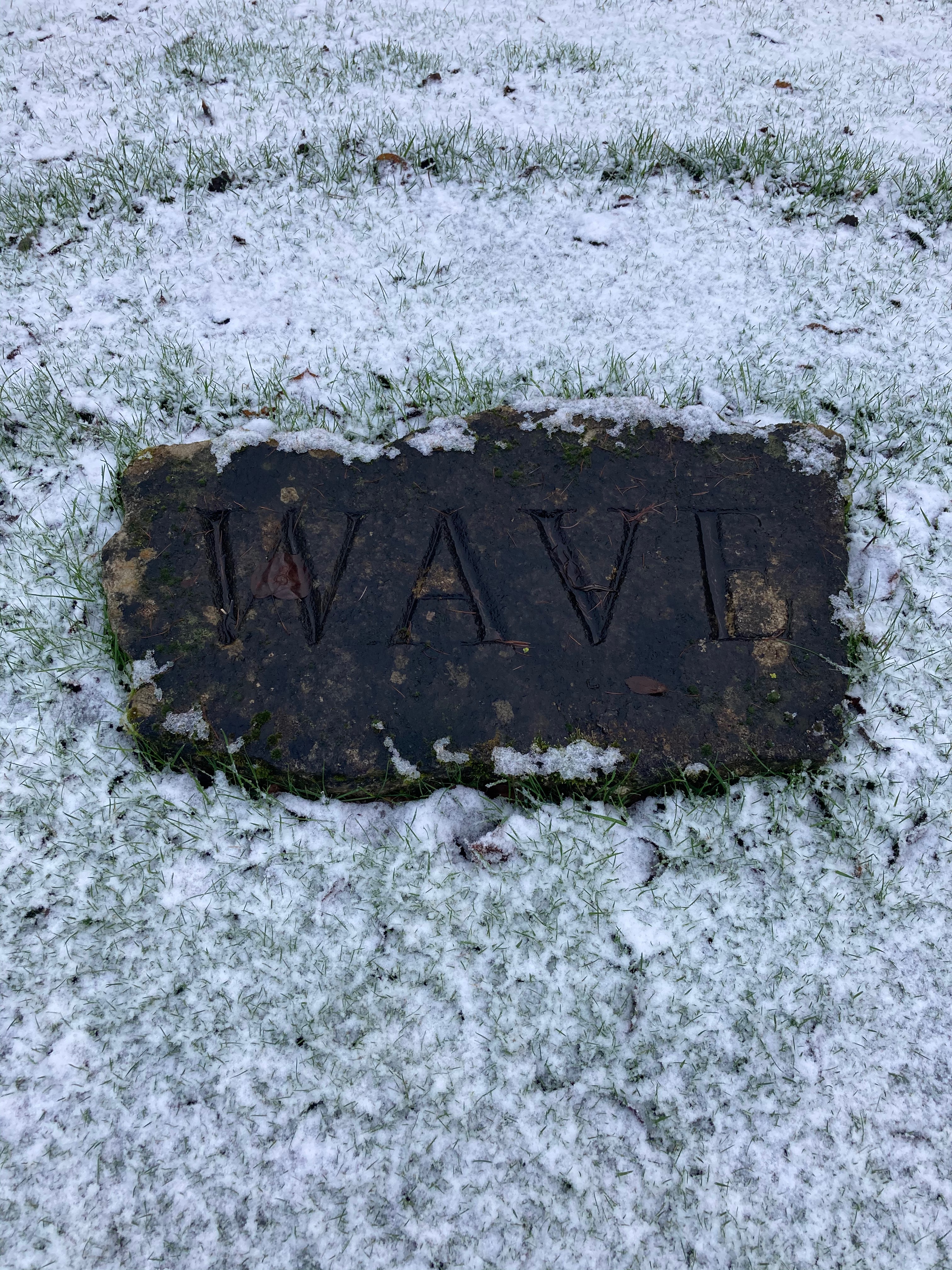 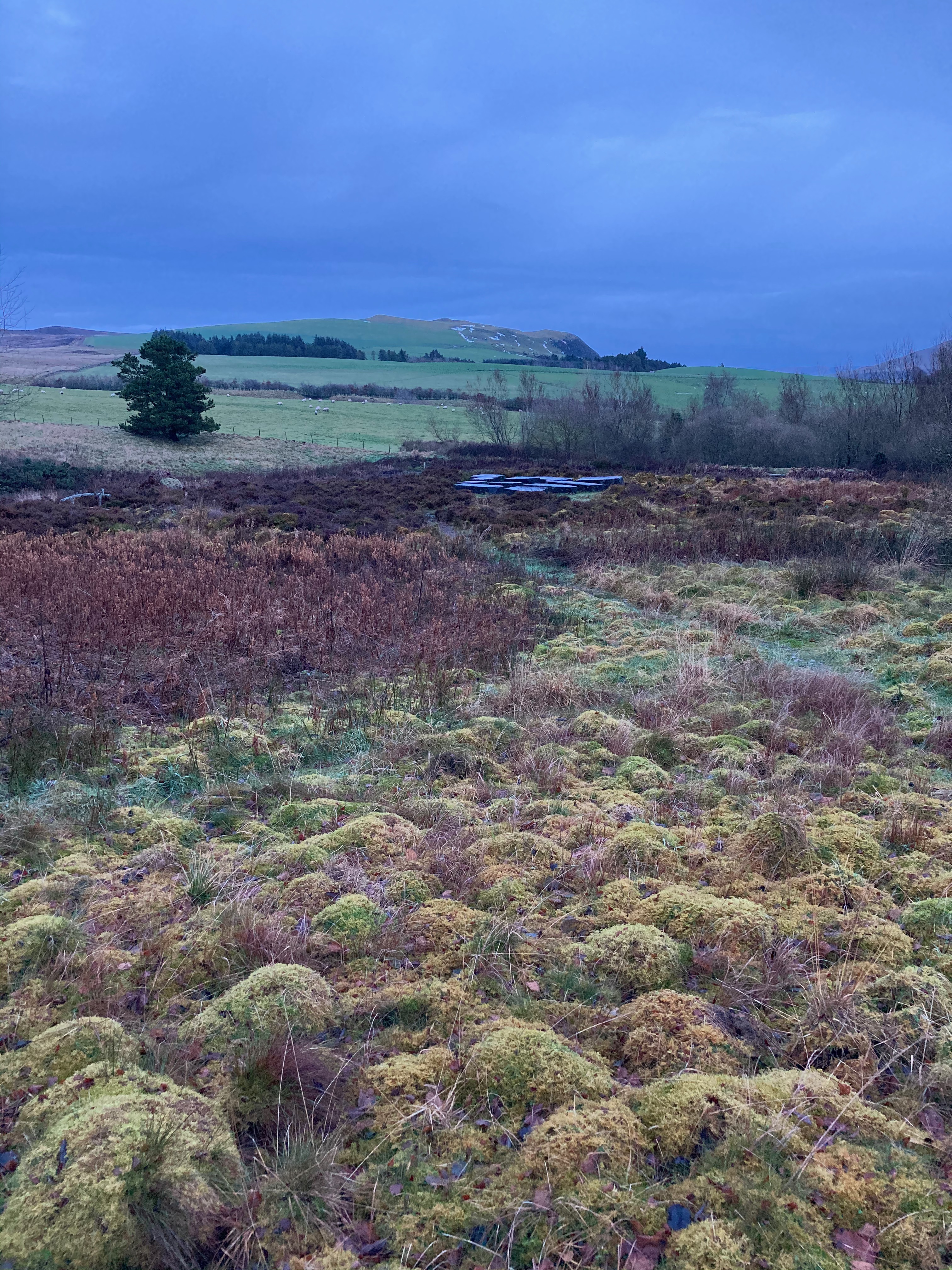 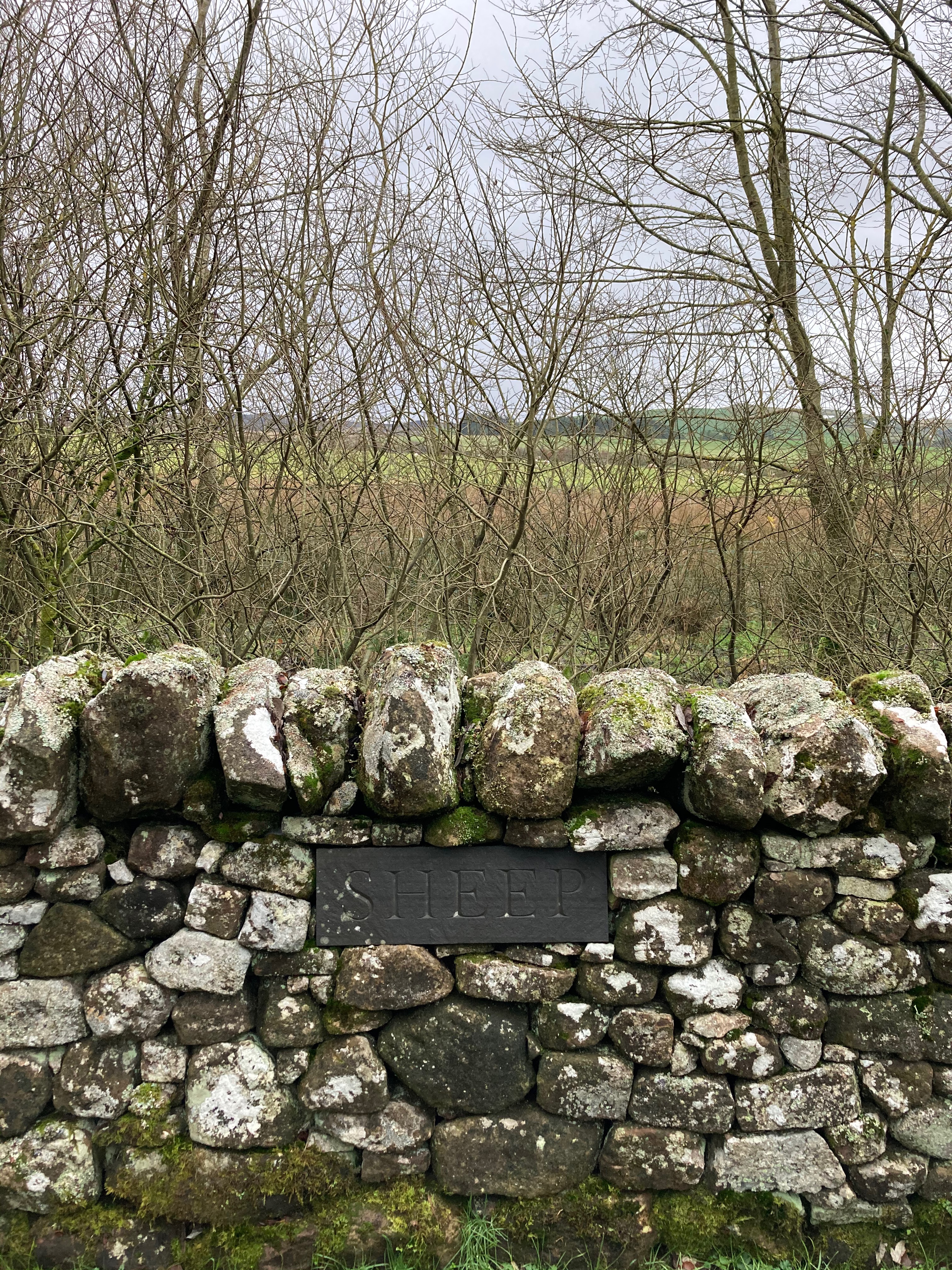 Short dark days are pierced through with low sun and long shadows. There are the first frosts as we steadily slip into winter. For the most part though it is grey and wet again, and this on top of already soaked and sodden ground.

Work continues indoors finishing off all of the repainting of moveable inscribed pieces, also the pair of carved stone containers of lemons – Silence After Chatter – The Astringent is Sweet, and the four Fruitidor calendar baskets from Julie’s Garden. These are painted afresh and ready to be put out again when the time comes.

All of the carved wooden benches have been cleaned where they are now sitting in storage and have been set aside ready for oiling.

By the side of the front gate – The Fluted Land – a broken rotted section of wooden fencing is being remade having finally relented to the ravages of weather and the rubbing of sheep and cattle.

One other work which has suffered badly from water and weather damage is the Metamorphic Trellis – both in the lower Parkland where its cross sections indicate a change of direction, and in the Woodland garden where it marks passage and transition from cultivated to wild. The difficulty with replacing or renewing these is that they were originally constructed from seasoned  rhododendron wood (the ‘wild’ part) a supply of which is very hard to come by. There are a few bits and pieces from the originals which have been saved – just enough to patch up and keep going for a while longer. This work will be completed in the coming weeks.

The footbridge which spans between the Middle pond and the Xiape pool has been replaced with new wooden railway sleepers – again the originals having finally rotted through-  and so now providing safer crossing to the metal figures of Apollo and Daphne concealed among the laurels.

Major work has begun on the track up to the garden to improve drainage and reduce ongoing damage caused by flooding. The stone surface has been scraped and levelled out so that the camber now slopes to the field below and acts as run off for excess surface water from the hillside – new drains have been put in across the worst sections. It is a messy but necessary intervention – and will all have to be resurfaced in spring when everything has (hopefully) dried out. The car park area remains to be completed.

Elsewhere in the garden the final bits of tidying out of beds in front of the Temples and in the Kailyard is completed – the promise of next season for these parts for now held within assorted seed packets.

It is clear where the worst sections of worn grass pathways will need to be replaced or renewed in whatever fashion – either by resowing or resurfacing. The worst bits in terms of wear and tear remain the saturated ground by the waterways in the Parkland or through the heavily trampled and shaded sections of the woodland, but there is no point in intervening until better days.

Where all other colour has gone now from the garden, on the raised boggy hillside above the lochan the mossed over mounds of heather and lichen coated twigs of shrubby undergrowth provide a subtle palate of greys and greens that shifts with the light.

For a short time only early in the month there comes the surprise of heavy snowfall which whites out the entire landscape and then just as quickly is gone.

These are days which merge with time and weather. The end of another calendar year, the silent passage to another season.