Some things are refreshed by it, others battered down – the unpredictable cycles of weather continue through the month and determine a lot of what can and has to be done in the garden.

Long grass collapses weighted down with rain, meaning that pathway edges have to be strimmed to keep passageways clear – the larger grass or lawn areas become soaked or trodden over  – either way they become more fragile and susceptible to damage.

Repairs are made to paths by the Top pond where they have been very badly worn – flat wild stepping stones stabilise the muddy paths where they have been heavily trampled – this is a temporary intervention until winter when further new brick sections can be laid permanently – this extends old repairs, but is still a pity as the grass just cannot get going before it is damaged in late spring. Hopefully these sections will naturalise in quickly without changing the essence of the pathways.

In the lochan there is more clearance of pond weed where it has been breaking the surface, though in general this is now well under control. The Nuclear Sail is cleaned and re-polished with linseed oil accentuating its dark ominousness

Willow herb by the front of the Grotto and Tragedies of Dido column is removed where it has been poking through again to keep it in check – it is always heartening to reclaim another area from the omnipresent weed.

Julie’s garden has been given a thorough tidy, taking out sweet cicely, and removing and replanting some of the self seeded campanula. There is further weeding by the house outside the front window where the fruit bushes have had their leaves stripped – these are cut back and new plantings of astrantia and echinacea put in place. 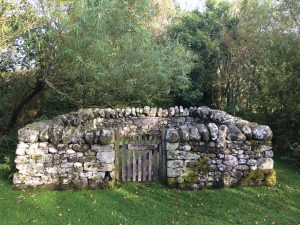 At the bottom of the Parkland the Eclogue sheep fold is given a seasonal mow and tidied up.

In the Allotment lovage is cut back and invading snowberry and sweet cecily removed and weeded out. A misshapen pine is also cut down here where it was leaning over the picket fence and stealing light – hopefully this will mean better growth next season, and maintain the decorative formal structure here.

Overhanging branches of copper birch have been removed letting light reach the Evening will Come western facing sundial. Along the top wall of the Hortus willow herb is removed where it has rooted itself in between stones, and inside the formal parterre box hedging has been cut and the beds tidied up. The Cloud pool is regularly cleaned out but from now on becomes a magnet for falling leaves and debris.

There are ongoing repairs to to the Top, Middle and Artemis pools  to keep them running – though water is still escaping somewhere underneath bypassing the system – probably along the space formed by tree roots – so that the aqueduct has been running slowly, even with all the volume of water supplied by the rain.

A couple of dead pines have been taken out by the Pyramid in the woodland garden, also further low hanging pendulous branches of copper birch have been pruned out in the in Parkland where they rob the grass and neighbouring trees of light.

More nettles have been removed – in the Little Wood and by the Tree-column base Pantheon area in the wild garden, also around the Middle pond by the wooden aqueduct and along all of the paths throughout the woodland.

Chrysanthemums have been planted in the front garden along the main entrance fishing boats path and  underplanted with fleabane, to bring late seasonal colour which has been lacking in this area, and regenerating the idea of a cottage garden. Foxgloves have also been planted by the shady area at the gable end of the house and store room by the Lararium housing the small bronze Apollo – St Just figure.

The oculus in the Grotto is cleared of overgrowing weeds so that the light gets in again and illuminates the inscribed text inside and the busts of the ill fated lovers Dido and Aeneas.

The large yew hedge by the Kailyard has been trimmed back, having missed a cut earlier in the season, it is good to see again its dense sharpened form which provides such a useful windbreak from the Parkland and fields beyond.

All of this clearing has meant a ready supply of material for a very large seasonal bonfire. The weather has been so unpredictable this month but the gradual certain shift is towards autumn – all of the signifiers are there – the sounds, colours and forms of the garden change. 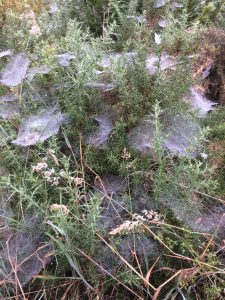 In the early mornings now we are greeted by the sight of lots of little cobwebs – silvery dew laden hammocks – stretched out between the spiky branches of gorse….