A change of atmosphere. 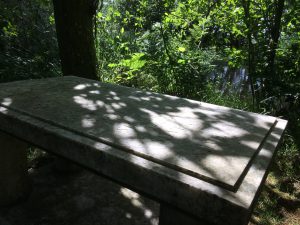 A couple of significant downpours and refreshing showers change the atmosphere – perking up the soft planting which had been beginning to look very sorry for itself after the long dry spell. There is a new freshness to all the greenery, though many of the summer blooms have now gone over.

All the burns have been cleaned out again to keep as much water as possible flowing freely, and all of the ponds have also been weeded out once more to keep water clear of algae and weed.

These interventions cannot stop the water system still causing us problems as it seems to have its own temperament – the Temple pond dries to a puddle and at the bottom of the Parkland the lower pond aqueduct refuses to flow.. It is a chance to renovate these areas though, as the perimeter of the Temple pond is cleared of overgrowing flag irises and water mint – when the water does fill again all is fresh and clear.

At the front of the house and in the sunken garden new planting continues along with a major round of clearing back other overhanging growth.

Willow herb has not flowered quite so prolifically this season, and efforts to curtail it are successful as it has been becoming an overwhelming menace. Much of the planting above the lochan which had been suffocated by the mass of willow herb we can now see clearly – at the moment the he 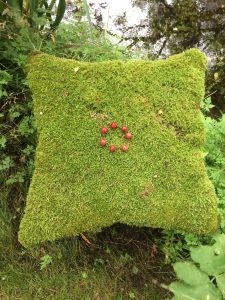 ather is colouring – its much more pleasant tints range across the hillside.

A rogue elder is removed from hill which had settled among the gorse – but not before its flower heads have been harvested to make cordial.

New tree saplings have been planted out in the car park and a small bed made under the entrance sign – this has been planted up with geum, primroses and Jacob’s ladder – a woodland garden in miniature.

The little wood at the front entrance continues to be cleared of nettles, thistles and willow herb and planted up with geranium, foxglove, ferns and colt’s foot – a much bonnier prelude to the garden beyond.

Overgrown ivy has been cleared from the shed in Julie’s garden and by the gable end wall of Baucis and Philomen temple.

Nettle clearance has become a dominant activity as it seems to have  benefited from the conditions this year – so by the middle pond around the wooden aqueduct, by the top pond edges and wherever seen these are pulled up and whole areas cleared. These are then replanted with foxgloves mostly, as we have a never-ending supply of seedlings.

Ajuga has been placed as understory planting at base of the Friedrich pyramid in the woodland garden, and around the  LN, Lorine Niedecker memorial stone. 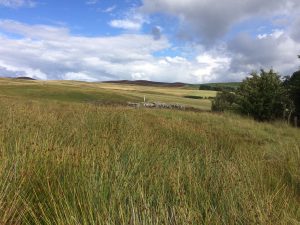 In the Kailyard we have been harvesting courgettes, salad leaves, kale and chicory – runner beans are still coming on.

We have had a decent season for blackcurrants after the disappointment of raspberries – brimming bowls have been collected and made into jam.

We turn our attention to seed collection and planning for new planting next year.

Now the days feel dull and emptied of colour – autumn is almost upon us.