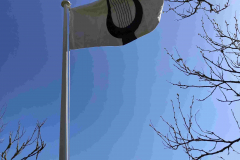 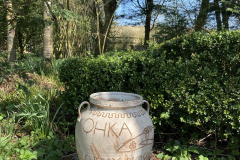 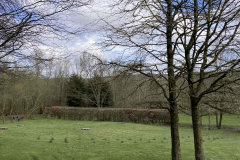 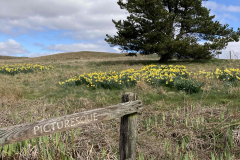 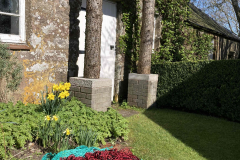 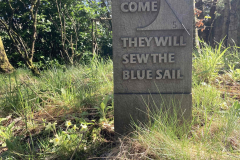 the freshness of new growth, daffodils still blooming away, much later here than everywhere else it seems, in golden swathes across the hillside by the back of the lochan, and throughout the wild and more formal parts of the garden. All the other usual spring colours also – bluebells are starting to flower in the woodland and down the bank by the Nuclear Sail, dog’s tooth violets in front of the Grotto of Dido and Aeneas, primroses, cowslips, forget-me-nots.

The edges of all grass pathways have been strimmed – including the serpentine paths through the lawn in the Parkland and on the moorland hillside by The Present Order. The first of many such rounds.

Greenhouse maintenance becomes a daily task just as about all seeds have germinated by now and everything is rushing on in tender new growth. Those seedlings which can be are now taken out during the day, gradually acclimatising and hardening off. There is still the risk of late frosts, so a bit early to think of planting out. The next week or so will make a big change. The first veg is also sewn direct in the Kailyard – all of these beds are ready and waiting.

The large yew hedge at the top of the Parkland is given a light trim into shape – it thus becomes a much more formal dividing line as well as essential shelter from the winds.

The thick jelly soup of frogspawn from earlier in the month separates into tadpoles – all of the ponds will need a clean and weed out before the season starts, but most are left for a while for everything just to get going. The formal circular Cloud pool in the Hortus is cleared of accumulated leaves. The Temple pond is cleaned out and a small repair made to the aircraft carrier Homage to Villa d’este.

Grass cutting of the formal lawns and pathways begins – the warm dry spell mid-month seems to have given new growth a spurt on, so that necessary regular cycle of activity has also begun. Grass seed and fertiliser are spread on bald worn patches and will hopefully germinate – though it is always pot luck if this happens before the tree canopy closes over and areas are left in shadow, or before fragile new growth is trampled upon.

The main job at this time though is to get all of the artworks uncovered from their winter wrappings, and those in storage brought out and placed back into position. It always feels like a great surprise after such a long period of passing by swaddled objects, to have their true sculptural forms revealed again. There is no major damage to note which is a relief – now all will require a clean and spruce up as they settle back into their surroundings, redefining themselves.

The Pantheon area has been given a bit of a much needed revival – the Michelet tree column base is remade in a larger size more in keeping with its attendant tree, the Robespierre is lifted up by one section and the Friedrich base is re-levelled. The others will also require the same attention – over time the tree roots have pushed out the bases, and they have begun to look out of scale to their surroundings. Already it is possible to see how much improved this area is as a central and very important feature of the garden.

Springtime is one of the key moments in the garden, full of promise. As objects become familiar again, as new growth comes on, the garden takes on its intended shape and function.