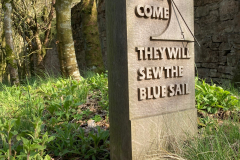 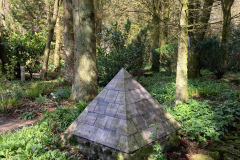 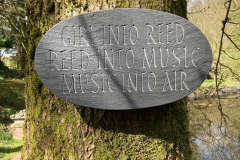 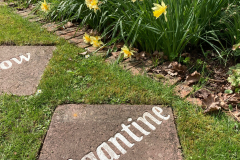 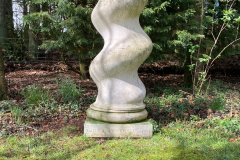 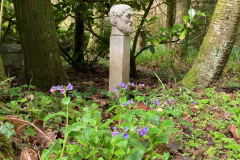 The trees begin to blossom just at the end of the month here – so much later than everywhere else it seems, but then also such a pleasure worth waiting for, that shift of form and colour, taking us through into springtime.

There is waiting too for a change from days early in the month which are marked by hailstorms, biting cold winds and overnight frosts – a change which comes just as suddenly midway through to a couple of weeks of long bright sunny days.

This in turn allows another job to begin and be quickly completed – the unwrapping of all of the artworks. Another type of shift, from the hidden to the revealed – it should not come as surprise as objects take on their proper form and presence, but such it is. Each area of the garden now unveiled or taken out from storage. Words redefine themselves, shapes emerge and fill their carefully composed settings.

This unwrapping though also marks the annual discovery of any winter damage – there are a few small repairs which will need to be made. These are mostly familiar or recurring damages – particularly to Portland limestone works, a stone which just is not attuned to this climate. Those works which sit in boggy ground are the most susceptible – the Arcadia column at the bottom of the Parkland, the Gates milestone, both split and needing repair. There are a few refresher or renewal issues which become apparent too – the brass silhouettes and nameplates of Camouflaged Flowers require cleaning and re-polishing, the golden slates on the roof of the Temple of Baucis & Philomen need to be re-gilded. Some of the worn brick pathways have degraded even further and the worst sections will need attention.

Elsewhere all of the bare grass path areas are given a pre-seeding fertiliser feed and then seed is raked through – hopefully the past weeks of warm weather will encourage germination. The grass itself, all of the lawned areas, is cut for the first time and this will become part of the regular round, as new growth begins. That simple little level of formality brought about by mowing and strimming also helps to restore the look of all the garden spaces.

In the beds and borders clearing out continues as there is plenty of fresh growth developing – bright new foliage poking through – but also a plague of ground elder. It seems to be revelling in conditions this year and is apparent everywhere – it is dug out from the Front garden and Kailyard, and around the raspberry beds. But true to its name brittle root, the least little bit left behind regenerates almost overnight it seems. A lengthy battle ensues.

Cowslips are coming through along with forget-me-nots and primroses, while daffodils still proliferate on the hillside at the back of the lochan, in the woodland and wild garden.

The brambles are tidied back at the Thesis / Antithesis stile to allow for scratch-free passage over it, and the cotoneaster overhanging the Camouflaged Flowers plinths is pruned back into the intended wave-like shapes again.

The benches in the greenhouses are now filled with seedlings coming along – and a few more things are sown direct in the Kailyard – carrots and beans. All of the terracotta container planters which have been kept indoors through the winter months are brought out, set in place and top dressed with new compost.

More wildflowers are sown in the fence gap by front entrance, from the Fluted Land gate along the perimeter to join up with existing wildflower patches by the flagpole. A mix of annuals and other perennials, as well as some more established giant bellflower and vipers bugloss are planted out. This whole area now as it joins into the Little Wood leading through into the garden is becoming much more settled and inviting.

The carved painted lettering on the ‘wild stone’ The Sea’s Waves Sheaves is redone and stands out bright and fresh by the side of the pathway where it sits with mounds of long grasses shimmering behind it.

The work on the new entrance building continues apace and should be fully ready for the summer – the structure is now up and watertight and internal works have begun. It is still very disruptive and there will be a good deal of work needed to tidy around once the UNDA patio goes back down again, and the remaining artworks which sit nearby put back in place or uncovered.

It is strange to be in such a familiar environment where the surrounding sounds rarely rise above birdsong or sheep bleating, hear them change into unfamiliar banging and hollering, but at least there is the reassurance that this transitory disorder is bringing with it a fully fledged and welcome new order.