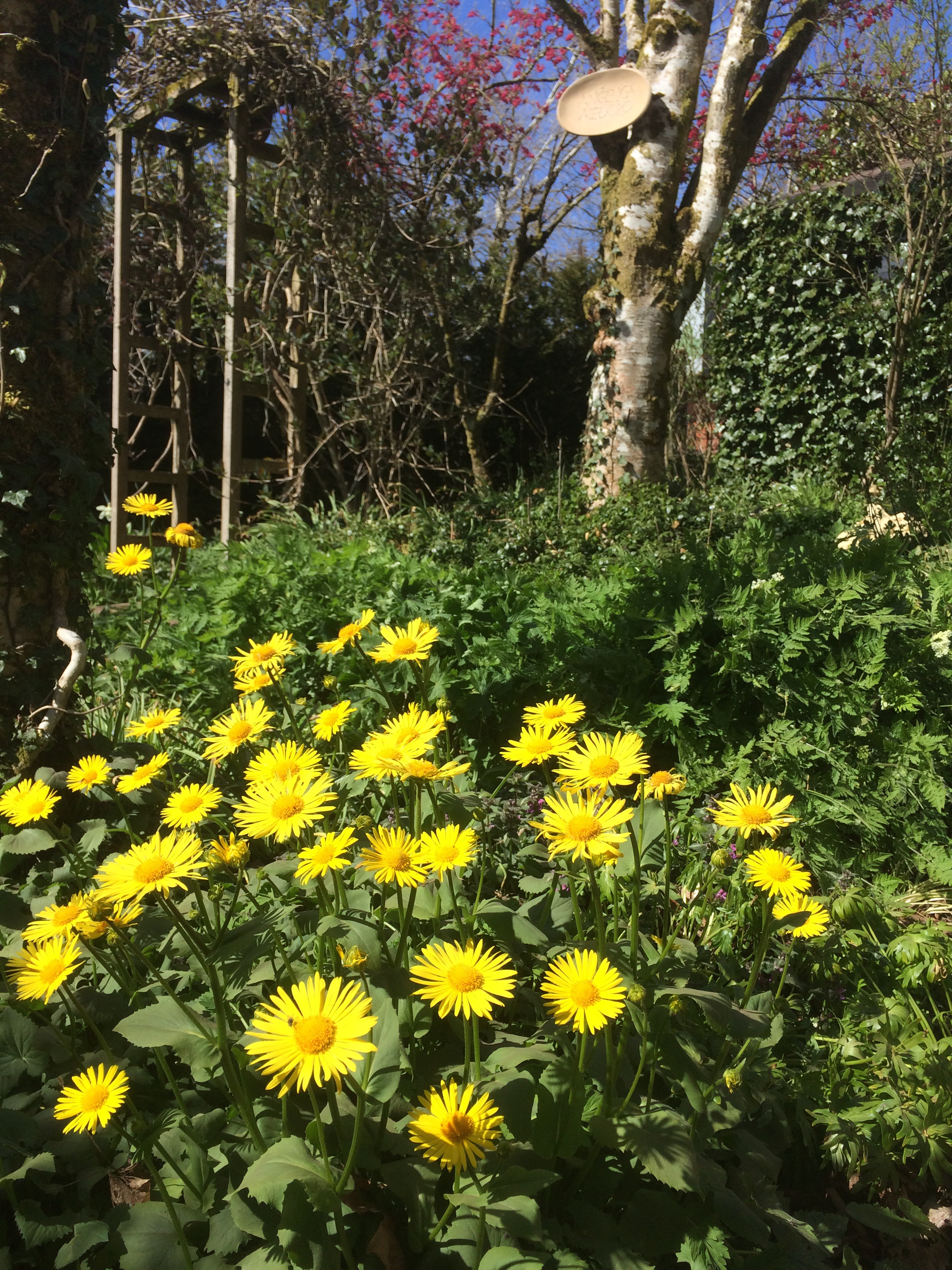 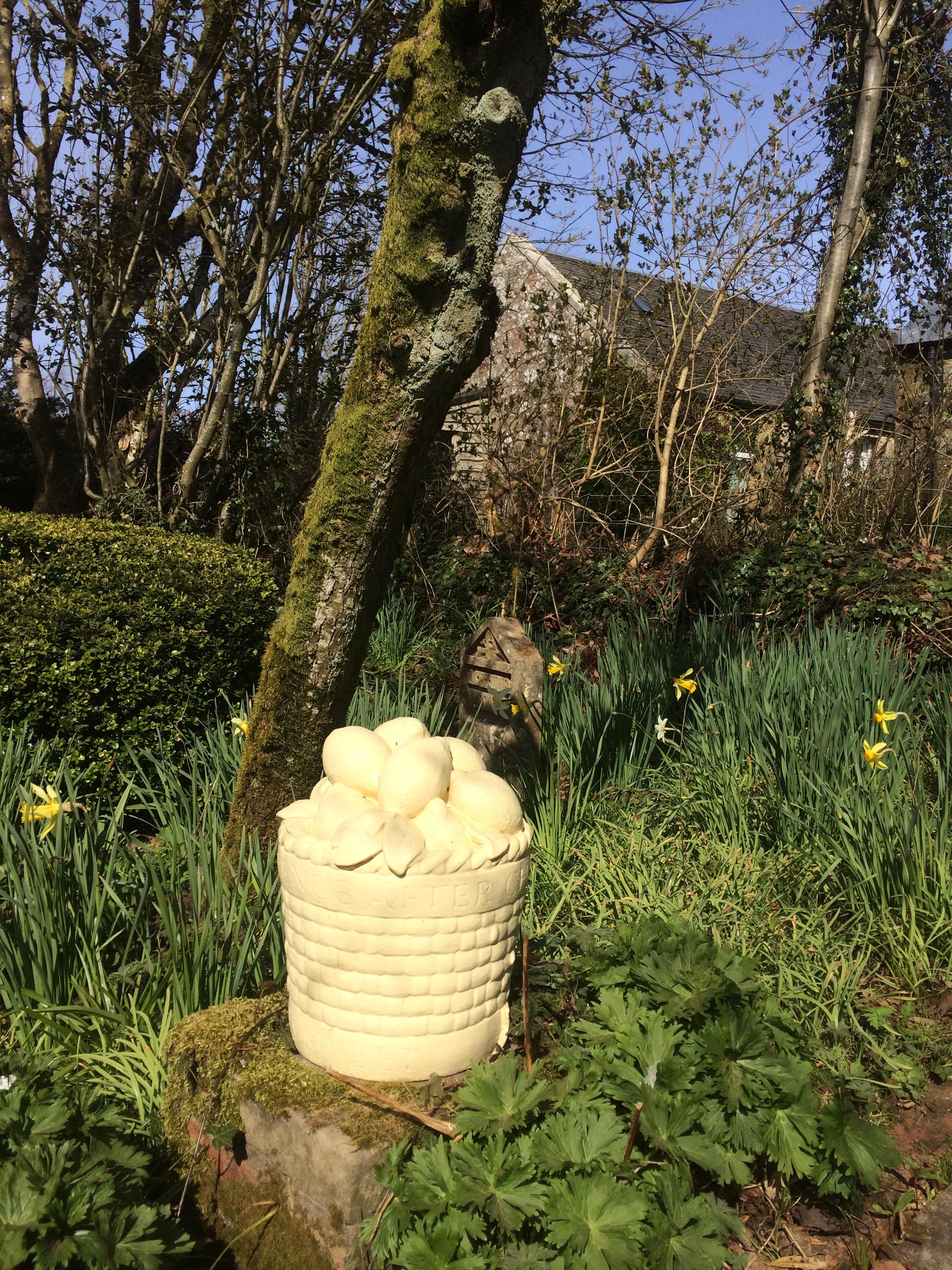 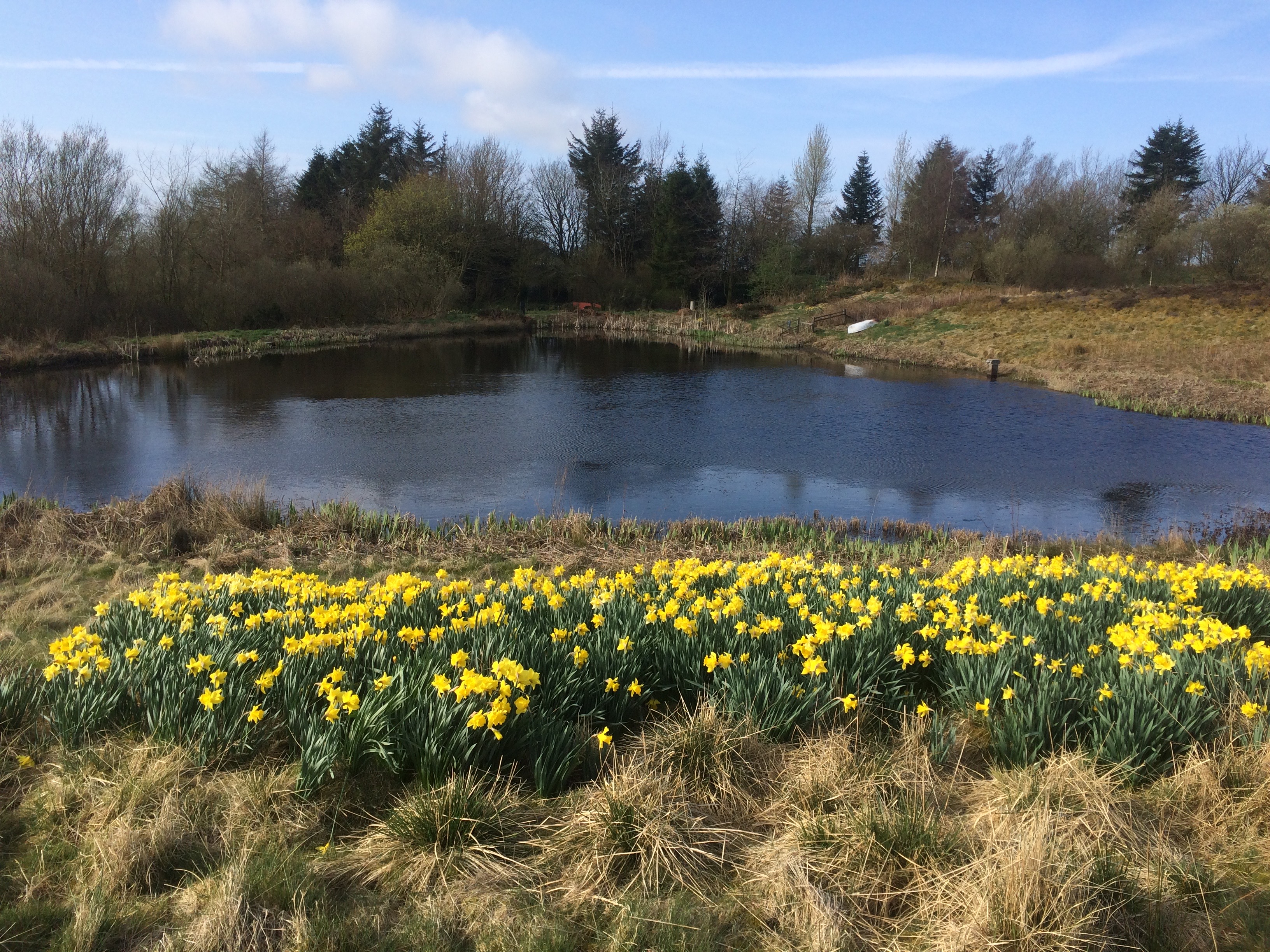 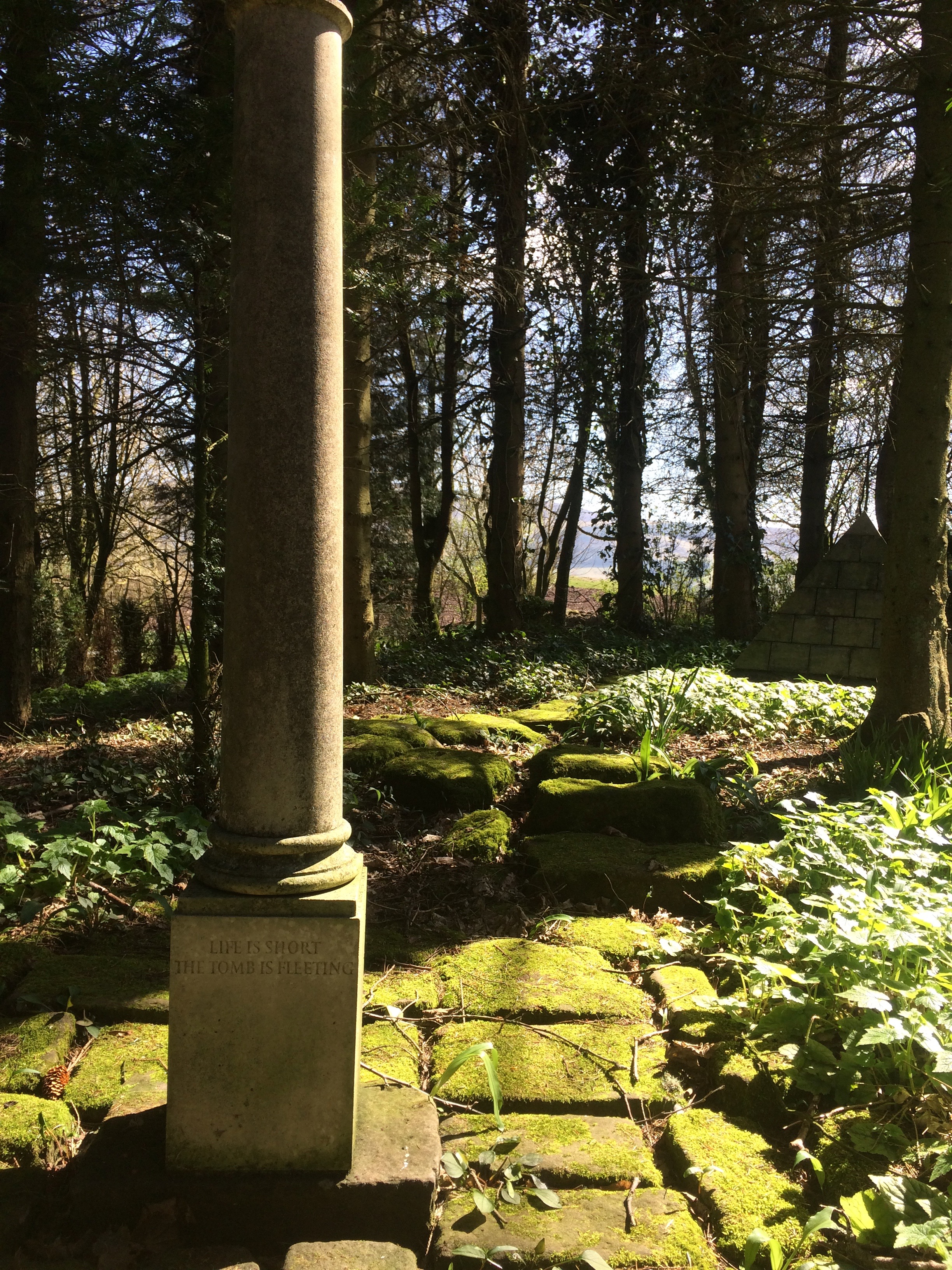 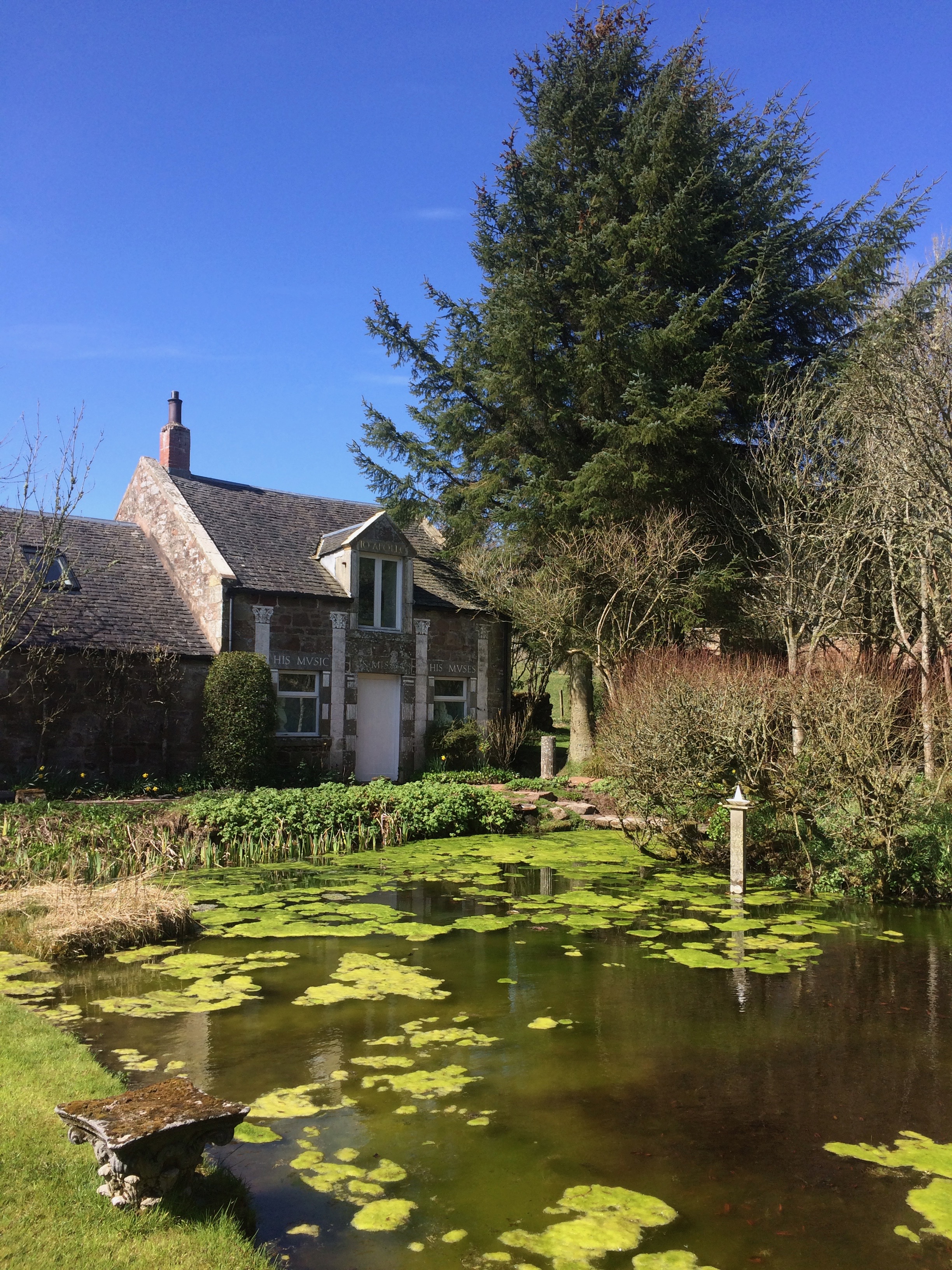 Nature renews itself. All along the bare length of branches, the downy backs of leaves unfurl themselves revealing the fresh green within.

Seasonal tasks take over – the jet-washing into the Wild garden is finished – paths leading to the O Tannenbaum and Holderlin Hegel Schelling stones, also the PINE, ELM, PLANE embossed brickwork which leads through to the to wooden Metamorphic trellis. All is brightened – an invitation to wander.

A mixture of compost soil improver is added and dug into the long beds in the Front garden and Kailyard – the beds here awaiting new produce from seeds which are now being brought on in the greenhouses. More space is made in these as all the oxeye daisies are now outside, some have been planted by the old metal farm gate in the English Parkland – this is no longer used for access and the surrounding trees are filling in the entrance space – so a bit of floral meadow planting underneath completes the scene. Many more are planted on the hillside above Picturesque.

The greenhouses themselves are given a clean and wash down.

Chamomile is removed from the Kailyard beds and replanted to form a carpet under the raspberry  canes both here and in the Front garden – as attractive companion planting but also hopefully as weed suppressant in these spaces.

More new planting has been put in along the Pompeiian garden – crambe (flowering sea kale) – as an attractive backdrop, large blue-leafed hostas between the strawberry columns (as formal structure), fillipendula rubra (pink meadowsweet – filling in the spaces with its delicate flowers).

Along the main Front path phlox, aster, anemone  (wind flower), thalictrum (meadow rue).and  phlomis (Jerusalem sage), have been put out – the hope is for a full display of white flowering and pale pinks throughout the summer months.

White thrift is tucked into the cracks in the paving in front of house by wave / sheaf, and rheum planted either side of the  Apollo-St Just lararium as sentries – and more rheum also near to the perimeter stone wall by Henry Vaughan, and Epitaph – the Little Secret.

New topsoil has been spread out on the grass pathways and to infill bare areas – fertiliser and grass seed put on top – all rolled out and now hope for germination – though the prolonged dry spell almost ironically leaves us wishing for a shower of rain to get everything going.

The rest of the grass has been cut for the first time this year, which always brings a unifying sense of order to the place. – as lawn reappears as lawn.

A new layer of gravel by the  Claudi bridge and in front of Temple of Apollo, the conservatory and by the entrance gate means all is refreshed in these areas.

There are still patch repairs needed to most of the pools and to the wooden aqueducts especially – these joints have been continually weakened by the sheer volume of water which has been coming through over the past while.

There is an infestation of blanket weed in Temple pool which makes amazing bright mottled camouflage patterns on the water. Once all the tadpoles have spawned and gone this can be given a good rake out and cleaned..

The repairs and planting have been finished off by the Caddis Shell / Goddess Shell water inlet here – small blue geranium fills in spaces left by excavations for the new water supply.

Later than usual this year the artworks are unwrapped from their winter coverings, as once again forms become objects, transformed in shape and meaning. All of the smaller pieces and wooden benches which have been in storage are also put back in place, along with all the more fragile container plants – completing the composition of the garden.

Most of the month has brought bright days – with sometimes a cold wind or a few early morning frosts but there is a long spell of warm clear days  – along with an overwhelming awareness of how quietness fills itself  – the slightest noise outside now amplified – birdsong, the sound of wind, water…

These are days of spring promise –  as even in the darkest corners greenness begins to quiver and glow.