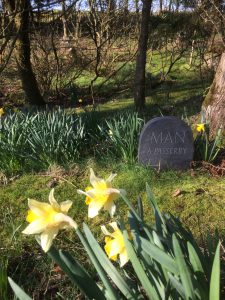 We are fully immersed in springtime – the light and colours of the garden change and freshen. Seasonal jobs start to stack up as new growth emerges.

There are many seedlings coming on now in the greenhouses soon to be planted out – and elsewhere – in the Kailyard and Allotment planned rows of herbs and vegetables take their place. In the sunken garden more pieces are woven into the Persian carpet effect – Pale Apollo violas, sedum and small campanula will fill out and decorate these spaces.

The grass pathways in the woodland have been given a lot more attention as finally they begin to show signs of germination – they are watered regularly now as a drying wind has been passing through the garden and leaving a lot of new growth struggling to establish. Throughout all areas of the garden the grass is cut again and already requires regular strimming and maintenance.

In the carpark area ox-eye daisies have been sown and planted along the banking by the roadside to indicate and more clearly and demarcate the entrance to the garden. Primroses have been salvaged from his area to and brought up to the woodland where they will readily naturalise.

All of the artworks have now been unwrapped or brought out of storage and are back out in place – it is one of the most pleasurable adjustments of the garden to encounter its structure and composition again. Fortunately given the general mildness of the past months there is no damage to report, but all pieces will require a clean and spruce up before we open again.

Regular maintenance is required to keep plugging holes in the Lower pond and Xiape overflow – but all is working again and the pools and the waterways are not quite so much of a challenge as before. The Temple pond is the first to be weeded out and the rest – including the lochan will be addressed in due course. Accumulated debris – twigs and branches – has been cleared from where it has been trapped or blocking the bridges throughout the system and all is flowing freely again.

In front of the Temple of Baucis and Philomen the cobble stones have been repointed to slightly more formalise this area, the ground has been cleared and prepared and new plantings put in. Also in the beds by the Temple of Apollo, the planting is simplified, a few resident thugs moved out (wild garlic relocated to the woodland where it can thrive in peace).

By the conservatory entrance an evergreen honeysuckle has been planted by the front door, a clematis – Rouge Cardinal and Jasmin de Grasse put in containers which will hopefully enjoy the conditions here.

The inscription of the wave / sheaf stone in front of the study window has been repainted blue and yellow and is much more apparent and eye-catching in its setting.

In the wilder areas of the garden the whins are now fully in blossom – their yellow outlines make bright cloud forms on the hillside.

In the Parkland the Freckled Freshet stone poem posts need to be levelled and reset in the burn where they had shifted and been moved off balance by the water flow.

All container plants which had been overwintered in the greenhouses have been put out – strawberries, hostas etc, each dressing an area of the garden, placed in relation to the surrounding artworks. Any old perennial left over growth has been cut back – for instance all of the ferns – to allow new shoots to come through.

The strawberry patch in front of the Allotment has been cleaned and planted up again and for the first time a sequence of painted camouflage posts – The Sea’s Leaves / The Strawberry’s Waves – installed here – it brings an attractive splash of colour and poetic interruption to a darkish area of the garden.

Finally the new replacement flag – denoting the music and missiles of Apollo (the outline of a lyre and oerlikon gun on either side) – has been hoisted, replacing the old one which had been frayed and destroyed by the winds. So the garden announces itself – order against disorder, nature over again.