I worked at Little Sparta in the 1980s, with Andy the stonemason, and we sometimes stayed over, sleeping in the Garden Temple, with evenings talking by the fire with Ian.

Understanding his home, and exile, there in the hills – his agoraphobia – I learnt that he walked with his family in them, out from the house and into the heights around. I came to understand that his agoraphobia was not fear of open spaces, but fear of unknown ones. And I came to understand how, as Ian wrote, “Our true home may be found in exile”.

So I saw him, in my mind’s eye, in the bowl of these known hills, walking the rim, looking down at the house and its single, old, tall, ash tree, the house and tree as his marker, his gnomen. I thought of him walking the edge and thought of him at the centre, drinking strong tea by the firelight – “Teapots are the Navels of a Happy Household”, his wee cross-stitch homily told us, hanging in the hall.

And he told me of his exile to Rousay in the 1950s: to a small, circular island home with a single hill strung round with ancient tombs, and that he worked on its single road, tarmaced it round the island, circumnavigating it. I thought of simple work and honest toil and the virtues of a metalled road, and the loneliness and loveliness of a perfect, singular wee island. And I thought of its hill and shore, then the bowl in the hills that Little Sparta coories in, and for a fleeting moment, as the fire crackled, saw the cone of the little island hill invert and slip snug into Little Sparta’s glen, with Ian walking the edge of both and beyond him the unknown roll of the broad Pentland Hills, and the deep roll and roar of the Atlantic.

He also told me of that tree by the house, the tall ash that was the only relief to the bleak moor when he and Sue first moved there. And he told me of the sigh or the roar of the wind in it – as I could hear it as we talked – as a constant, elemental known; and that the first act of his art in that place was to hang the plaque on it: “Mare Nostrum”. 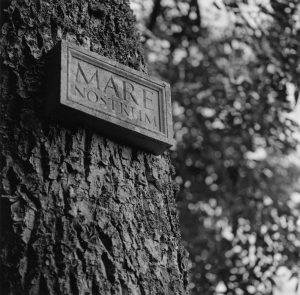 Our Sea. The Mediterranean at the Roman centre of the world, its civilisation circumnavigating it as Aneas did, exiled home. The sound of the waves of Mare Nostrum constant behind civilisation as the wind in the tall tree; and the house and the hills and its wind and culture, was Rousay with its tombs and its road and the waves on its shore, was the whole weight and light of classical civilisation; and the transforming and connecting power of word, and art, and strong tea, friendship and firelight, took my breath away…