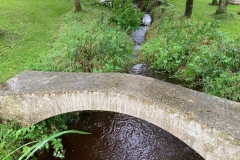 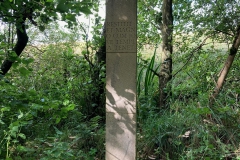 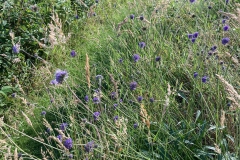 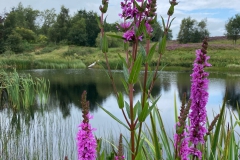 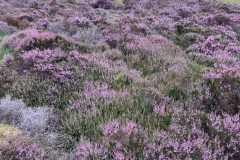 A month of contrasts as we seem to be on the receiving end of every storm or front – low clouds caught on the hills emptying themselves of rain in torrents. Everything is again drenched through. It is a rush to get some essential jobs completed in between showery days. When the cloud does lift though and the sky brightens again there is a moment when the garden exudes an almost magical light.

There is the usual round of trying to keep everything in check and tidy – the grass and the pathways now all very soft and slippery or muddy underfoot.

Through the Parkland waterways all of the pools are cleared of water mint, nettles and and grasses where they have crept into the water and edges are redefined. Holes and overflows are plugged or reinforced again. There is obviously no shortage of water supply at the moment, but too much brings with it its own problems – flooding and weakening the banks.

The Claudi pond and Temple pool are cleared out again – and the willows which form the backdrop to the marble paper boat and aircraft carrier here are clipped back into shape also, formalising the space and setting.

In the Hortus the roses have been doing reasonably well this season – regular deadheading keeps them blooming. The little circular Cloud pool is cleaned out regularly to keep its mirrored surface clear, and all of the parterre box hedging had been re-clipped to keep its tightly shaped edges.

There is further tidying completed in Julie’s garden – and the yew hedges here trimmed also – they have reached a good height now and are filling out well – a dense dark backdrop to a romantic space.

In the Roman garden all of the hostas have been repotted in new terracotta planters as befits a formal area, and give a uniform camouflage to the sculptural works set here.

Rose bay willow herb, of course, keeps rushing on with its usual vigorous growth – it is well kept in check now from flowering and contained to the areas where it should be, so does not dominate quite so much. Plenty of fireweed fuel for the bonfire.

On brighter days the air is muggy warm and heavy. There is a playfulness of light and shadow – the filtered effects of ‘glooms and solitudes’ are apparent.

Huff Lane hedging has been kept in shape and clipped back – the base cleared of nettles. The perimeter hedge in the Front garden and all of the box topiary forms here are also are given another tidy.

The Little Wood at the entrance has been given a good bit of attention to clear this area too of the unwanted nettles and willow herb. It is then replanted with foxgloves and clumps of geum or wood avens, which will all hopefully knit together with the other existing understory planting here to help suppress the enemy and consolidate what is settling into a very welcoming and attractive spot.

The German and Roman chamomile has been cleaned out from under the raspberry beds in the Kailyard and Front garden where its flowering had gone over – there will be plenty of self seeded plants to keep going next season.

There have been autumn sowings in the greenhouses –  cornflower, viper’s bugloss, marshmallow, musk mallow, giant bellflower, yarrow ‘Love Parade’, cerinthe and moss campion – all useful and familiar plants starting to germinate and which will be ready next year to fill awaiting spaces.

On the moorland hillside above the lochan now, the heather is in full bloom – its sweet musky purple mounds attract hordes of foraging honeybees. The sights, sounds and scents of late summer fill the air.